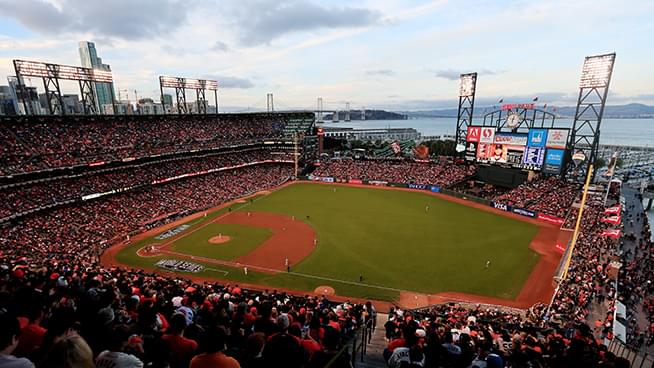 CREDIT: SAN FRANCISCO, CA – OCTOBER 24: A general view as the Kansas City Royals takes on the San Francisco Giants during Game Three of the 2014 World Series at AT&T Park on October 24, 2014 in San Francisco, California. (Photo by Rob Carr/Getty Images)

It appears there will be real, live, breathing fans in the Giants’ home opener, which is set for April 9 against the Rockies. Under the California guidelines that were announced Friday by Gov. Newsom, outdoor stadiums in certain tiers can host fans starting April 1. No April Fool’s about it.

How many will depend upon the tier. San Francisco is currently in the red tier, which would allow 20 percent of Oracle Park to be filled, which equates to about 8,400 happy, sentient fans.

If San Francisco moves from red to the orange tier — which its coronavirus numbers project it to soon — 33 percent of customers could enter the park for Giants home games. That’s nearly 14,000 fans.

It San Francisco slides back to the Purple tier, the park would be limited to a maximum 100 fans.

Actually allowing fans back is subject to final approval by local health officials, so it’s not quite a completed decision, but all signs are pointing toward Oracle Park being partially filled with fans in socially distanced pods.

“It’ll mean so much for us to have fans in the stands,” manager Gabe Kapler said. “I think universally we feel more supported, more engaged, more excited when our fans are behind us. Obviously we have a job to do no matter what the surroundings are, but San Francisco Giants fans make our games better. It’s really good news.”

In a statement, the Giants said they are “encouraged” by the development.

“Health and safety is our number one priority and we have been working over the past several months to develop plans and protocols to ensure a safe experience for our fans, employees and the community as a whole,” the club said. “In the coming days, the Giants will submit our operational plans for review and approval by the local health officials and we eagerly look forward to safely welcoming fans back to Oracle Park.”