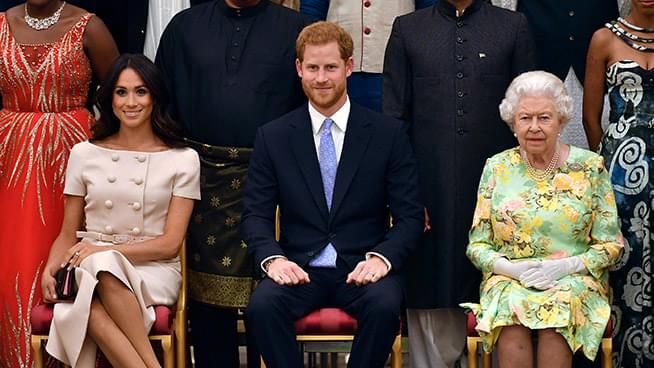 FILE – In this Tuesday, June 26, 2018 file photo Britain’s Queen Elizabeth, Prince Harry and Meghan, Duchess of Sussex pose for a group photo at the Queen’s Young Leaders Awards Ceremony at Buckingham Palace in London. Prince Harry and Meghan Markle are to no longer use their HRH titles and will repay £2.4 million of taxpayer’s money spent on renovating their Berkshire home, Buckingham Palace announced Saturday, Jan. 18. 2020. (John Stillwell / Pool Photo via AP, File)

Explosive revelations as Meghan and Harry accuse the British royal family of failing to protect them.

The royal family has yet to respond to accusations from the couple, including that one of its members questioned how dark their baby’s skin would be, and that palace officials refused requests from the Duchess of Sussex for medical help when she felt suicidal.

Bill McCuddy is an Entertainment Reporter for PBS and the NYPost. He is a voting member of the Critics Choice awards which had the misfortune of airing opposite the Oprah interview last night. He also hosts the podcast The Accutron Show on Spotify.

While many of us may roll our eyes and say we don’t care about the royals — the ratings for last night’s interview say otherwise: Meghan Markle and Prince Harry’s sit-down with Oprah Winfrey was a blockbuster in more ways than one. Chris Merrill fills in for The Pat Thurston Show.