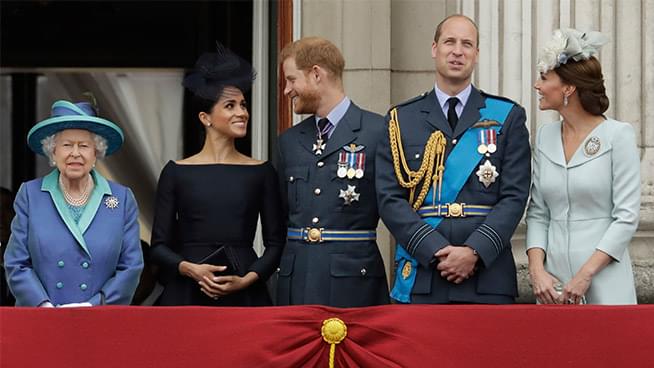 FILE – In this Tuesday, July 10, 2018 file photo Britain’s Queen Elizabeth II, and from left, Meghan the Duchess of Sussex, Prince Harry, Prince William and Kate the Duchess of Cambridge watch a flypast of Royal Air Force aircraft pass over Buckingham Palace in London. Britain and its royal family are absorbing the tremors from a sensational television interview with Prince Harry and Meghan. The couple said they encountered racist attitudes and a lack of support that drove Meghan to thoughts of suicide. The couple gave a deeply unflattering depiction of life inside the royal household, depicting a cold, uncaring institution that they had to flee to save their lives. Meghan told Oprah Winfrey that at one point “I just didn’t want to be alive anymore.” Meghan, who is biracial, said that when she was pregnant with son Archie, there were “concerns and conversations about how dark his skin might be when he’s born.” (AP Photo/Matt Dunham, File)

“The bottom line is, it was fascinating”

On today’s edition of The Ronn Owens Report, Ronn reacts to what everyone’s been talking about — the Oprah interview with Harry and Meghan.