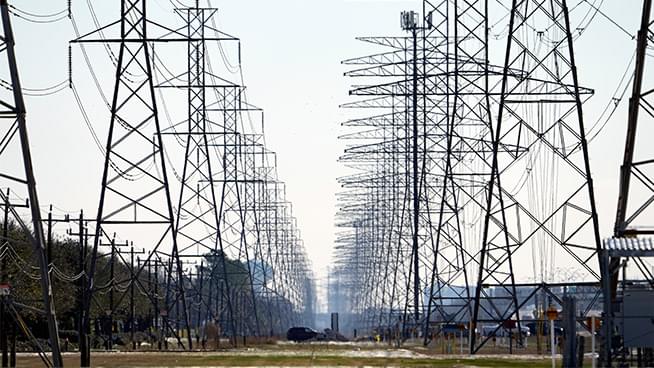 FILE – This Tuesday, Feb. 16, 2021, file photo shows power lines in Houston. When an unusually heavy winter storm blanketed much of Texas with snow, knocking out electricity to millions of homes and leaving many struggling to find clean water, one sector of the population was particularly vulnerable: inmates in Houston at the state’s largest county jail. (AP Photo/David J. Phillip, File)

David Cay Johnston joins The Mark Thompson Show on Tuesday to discuss child slaves, minimum wage, catastrophes in Texas and what is happening with power plants.

“We all know what happened with the problems in Texas, it was a catastrophe, to call it problems is to be polite,” said Thompson before asking Johnston to explain the bigger issues at play.

When explaining the thought process of people from Wall Street shutting down power plants in order to make money and avoid risky investments, Johnston said:

“In New England, some guys from Wall Street who’ve never run a power plant in their lives, bought 17 power plants. They shut down the biggest one they had…that plant was worth maybe 300 million dollars, the price of electricy in New England went up $1.8 billion, these guys got collected about $360 million of it. So they got back all the money for buying that power plant and they made $60 million profit the first year. The next year, they made about $360 million in extra profit but withholding electricity. That’s happened in California, the PUC has similar rules and they’ve done a terrible job of policing the rules. They are supposed to not let this happen, but it goes on everywhere.”

Listen to the full conversation between Johnston and Thompson below.