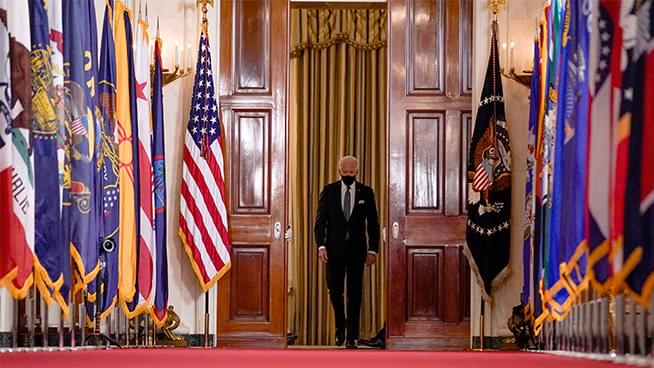 President Joe Biden arrives to speak about the COVID-19 pandemic during a prime-time address from the East Room of the White House, Thursday, March 11, 2021, in Washington. (AP Photo/Andrew Harnik)

President Joe Biden is urging Americans to “stick with the rules” as he wraps up his address to the nation on the one-year anniversary of the beginning of coronavirus pandemic.

He is voicing optimism that the United States will edge toward a semblance of normalcy in the coming months, noting “there is hope and light of better days ahead if we all do our part.”

But the president is also warning that “we may have to reinstate restrictions” if Americans fail to stay vigilant about social distancing and other precautions to help stem the virus.

Biden says, “Please, we don’t want to do that again, we’ve made so much progress,” adding, “This is not the time to let up.”

Biden spoke for 24 minutes from the East Room of the White House.

President Joe Biden is condemning the violence Asian Americans have endured since the start of the coronavirus pandemic, saying “it is wrong, it is un-American and it must stop.”

Biden is lamenting an uptick of reports of “vicious” attacks and harassment against Asian Americans that’s been reported since the start of the pandemic one year ago.

Former President Donald Trump has repeatedly used xenophobic terms to refer to the virus that originated in China’s Wuhan province. Some critics say the former president’s language has stoked the violence against Asian Americans.

Biden is addressing the nation on the one-year anniversary of the pandemic.

President Joe Biden is delivering a somber but optimistic message on the one-year anniversary of the coronavirus pandemic.

Speaking from a lectern in a flag-draped backdrop in the East Room of the White House, Biden is reflecting on the worst public health crisis in more than a century. It has killed nearly 530,000 Americans, sickened millions more and ravaged the global economy.

President Joe Biden is planning to announce during his prime-time address Thursday night that he’ll deploy 4,000 additional U.S. troops to support coronavirus vaccination efforts. He’s also vastly expanding the pool of people who are eligible to serve as vaccinators.

That’s according to a senior administration official who briefed reporters ahead of Biden’s address to the nation. The official says the president will also announce plans to double the number of pharmacies participating in the vaccination program, expand mobile operations to vaccinate people in communities that have been hard-hit by the virus, and double the number of federally run mass vaccination centers.

There are currently 2,000 active-duty troops supporting vaccination efforts around the country.

The official says the White House plans to detail plans on Friday to expand who can administer shots. Dentists, paramedics, physician assistants, veterinarians and medical students will become eligible to administer vaccinations under the new guidance.

President Joe Biden will use his first prime-time address on Thursday night to announce that he is directing states to make all American adults eligible for a coronavirus vaccine no later than May 1.

That’s according to two senior administration officials who briefed reporters ahead of Biden’s evening address on the one year anniversary of the pandemic. The officials say the president will also say that there is a good chance Americans will be able to safely gather in small groups by July 4.

Biden is also expected to stress that the “fight is far from over.” But he’ll say the nation will be in a “far better place” by the Independence Day holiday if Americans wear masks, follow public health guidelines and get vaccinated when it is their turn. The officials spoke on condition of anonymity to keep the focus on the president’s address.