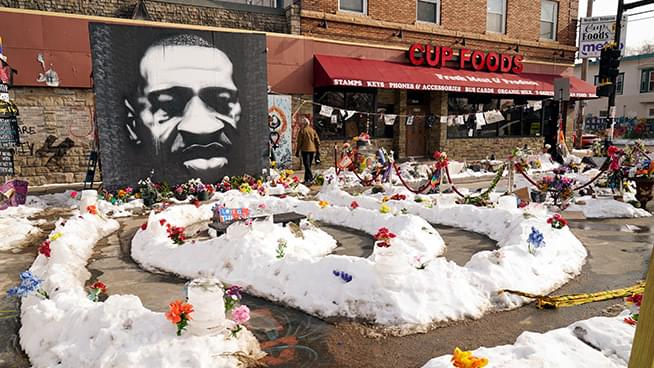 In this Feb. 8, 2021 file photo, A mural of George Floyd is seen in George Floyd Square in Minneapolis. The city of Minneapolis on Friday, March, 12, 2021, agreed to pay $27 million to settle a civil lawsuit from George Floyd’s family over the Black man’s death in police custody, as jury selection continued in a former officer’s murder trial. The settlement includes $500,000 for the south Minneapolis neighborhood that includes the 38th and Chicago intersection that has been blocked by barricades since his death, with a massive metal sculpture and murals in his honor. (AP Photo/Jim Mone File)

The Minneapolis City Council unanimously agreed to pay $27 million to settle a federal civil lawsuit from George Floyd’s family over Floyd’s death in May of 2020. Floyd was declared dead after now former officer Derek Chauvin pressed his knee on Floyd’s neck for almost nine minutes. Ben Crump, Floyd’s family attorney, called the settlement “just one step on the journey to justice.” Chauvin’s trial is currently underway, causing some to think the newly announced settlement will affect a jury’s outcome.