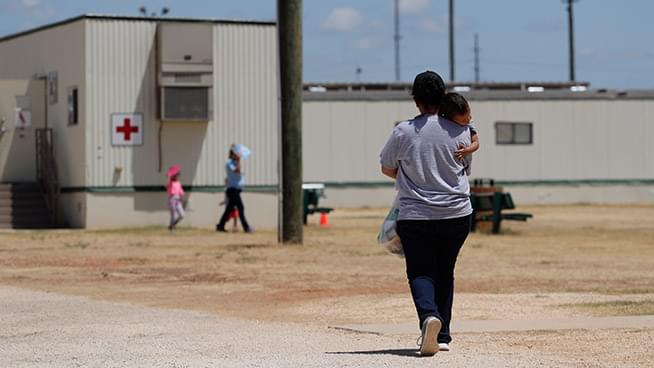 FILE – In this Aug. 23, 2019 file photo, immigrants seeking asylum walk at the ICE South Texas Family Residential Center, in Dilley, Texas. The U.S. government plans to use the downtown Dallas convention center to hold up to 3,000 immigrant teenagers as sharply higher numbers of border crossings have severely strained the current capacity to hold youths, according to a memo obtained by The Associated Press.  The Kay Bailey Hutchison Convention Center will be used for up to 90 days beginning as early as this week, according to the written notification sent to members of the Dallas City Council on Monday, March 15, 2021. (AP Photo/Eric Gay, File)

Some House members are avoiding vaccination

About 25% of the members of the House are either avoiding or refusing to get vaccinated.

U.S. to house up to 3,000 immigrant teens at Dallas convention center

Up to 3,000 unaccompanied immigrant teens who crossed the Mexican border and are now in U.S. government custody will be held in Dallas’ downtown convention center starting this week, officials say. An exhibit hall at the Kay Bailey Hutchison Convention Center will be used for up to three months by federal agencies to house 15 to 17-year-old boys. The “decompression center” will be used to alleviate overcrowding at other U.S. facilities closer to the Mexican border.

Pope Francis has invited LGBT advocates to the Vatican. He has spoken warmly about the place of gay people in the church. He has called for national laws for same-sex civil unions. But today, Francis definitively signaled the limits to his reformist intentions, signing off on a Vatican decree that reaffirms old church teaching and bars priests from blessing same-sex unions.