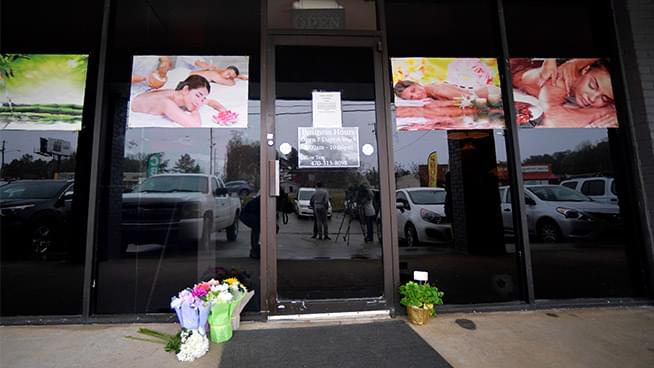 A make-shift memorial is seen outside a business where a multiple fatal shooting occurred on Tuesday, Wednesday, March 17, 2021, in Acworth, Ga. Robert Aaron Long, a white man, is accused of killing several people, most of whom were of Asian descent, at massage parlors in the Atlanta area. (AP Photo/Mike Stewart)

ATLANTA (AP) — A white gunman has been charged with killing eight people at three Atlanta-area massage parlors in an attack that sent terror through the Asian American community. Robert Aaron Long told police that the attack wasn’t racially motivated, claiming to have a “sex addiction.” Authorities say he apparently lashed out at what he saw as sources of temptation. Six of the victims were identified as Asian and seven were women. The killings horrified the Asian American community, which saw the shootings as an attack on them, given a recent wave of assaults that coincided with the spread of the coronavirus across the United States, reported Kate Brumback and Angie Wang.

I’ve asked @SFPD to increase patrols in areas with a high number of Asian residents, visitors, and businesses immediately. More long-term efforts to will also be announced shortly. No one should have to live in fear that their race or ethnicity could make them a victim.

The attack in Georgia and the racist attacks that have been happening all across our country are abhorrent. Our hearts are with the families of all the victims of this horrific act and the entire AAPI community tonight. #StopAAPIHate

The trauma in Atlanta this morning is felt deeply in Oakland. Gun violence, violence against women, and the rise of anti-Asian violence all must end. We send love + healing to the families of the victims and all those who grieve this national tragedy.

The GA fatal shootings are yet another tragic case of horrific gun violence. Authorities say many of the 8 killed are API women. While we don’t know all of the details yet, our community is already hurting, angry & taking action to #StopAAPIHate. Enough!https://t.co/LfjG5QUFm5