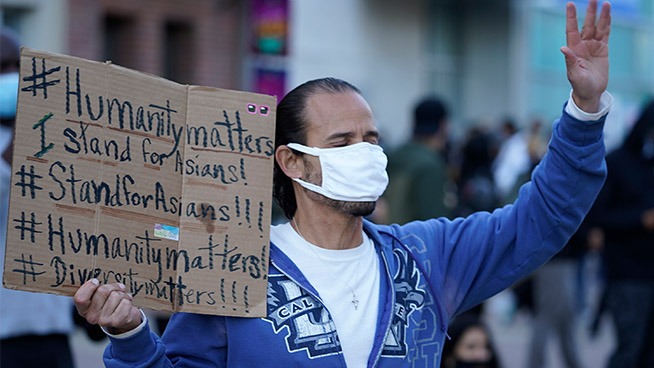 A threat to American Democracy

A federal appeals court judge issued an extraordinary opinion Friday attacking partisan bias in the news media, lamenting the treatment of conservatives in American society and calling for the Supreme Court to overturn a landmark legal precedent that protects news outlets from lawsuits over reports about public figures. D.C. Circuit Senior Judge Laurence Silberman’s diatribe, contained in his dissent in a libel case, amounted to a withering, frontal assault on the 1964 Supreme Court decision that set the framework for modern defamation law — New York Times v. Sullivan.

Amid the increase in attacks on Asian Americans here in the Bay Area and across the United States, people are coming together to rally and denounce the violent behavior. A “Stop Asian Hate” rally took place in San Francisco’s Chinatown today.

There are growing calls for the San Francisco school board vice president to resign after previous tweets appearing to be biased against Asians surfaced. In 2016, Alison Collins posted several tweets accusing Asian Americans of using white supremacy to get ahead of their Black colleagues. Collins also allegedly used a racial slur. In a statement, fellow school board member Jenny Lam, who is the only Chinese American member on the board, asked Collins to step down, adding in part “Collins must address her racist comments.”

School board member’s racist comments and school renaming on hold

A civil rights group founder, political leaders, parents and alumni called Friday for a San Francisco school board member to resign after critics highlighted a series of racist tweets she posted in 2016 about Asian Americans, who have been targeted in a recent surge of violent acts in the Bay Area and across the country.

Also, In a ruling yesterday, Judge Ethan Schulman ordered the SFUSD  to either vacate its renaming resolution and dissolve the School Names Advisory Committee or to show good cause for why it has not done so at a hearing set for May 6.

The House on Thursday passed two proposals that would legalize subsets of the estimated 11m immigrants living in the U.S. without legal permission, as Democrats gauge the chances of approving immigration legislation and sending it to the President.

Joined by nine Republicans, all House Democrats voted to approve the American Dream and Promise Act, which passed by a vote of 228 to 197. The proposal would allow more than 2.3 million “Dreamers,” or unauthorized immigrants who came to the U.S. as minors, as well as beneficiaries of certain temporary humanitarian programs, to gain permanent legal status and eventually, U.S. citizenship.

By a vote of 247 to 174, the Democratic-led House also passed the Farm Workforce Modernization Act, which would grant legal status to hundreds of thousands of farmworkers living in the U.S. without authorization. Thirty Republicans voted in favor of the bill, and one Democrat voted against it.

Bullied – A film by Thomas Keith

The film Bullied is a work that traces bullying and the effects of bullying, but also the methods and programs that have proven efficacious in reducing bullying in schools. From those people who live with  the scars of having been bullied to those families who now grieve the loss of their child to suicide  in  the  wake of brutal acts of bullying, the film examines the reasons why people bully and the  fallout  that  occurs  from that bullying.

Bullied is streaming on Tubi TV, and Docurama for Amazon, Comcast, and Sling TV, as well as Zoomoo, Films for Action, Google Play, YouTube Movies, and Roku.
People can learn more about the film at www.tomkeith.com

Jan Wahl takes us to the movies