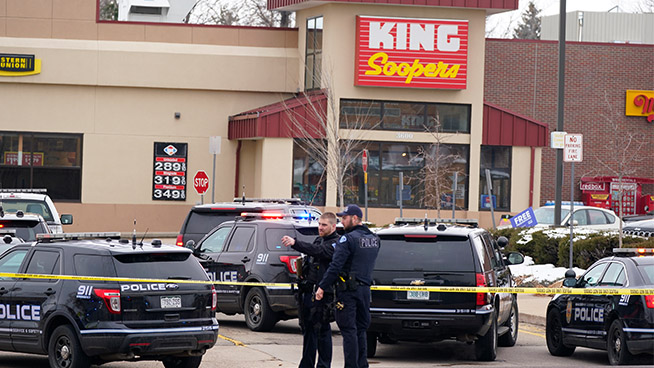 Police work on the scene outside of a King Soopers grocery store where a shooting took place Monday, March 22, 2021, in Boulder, Colo. (AP Photo/David Zalubowski)

BOULDER, Colo. (AP) — Police say 10 people have been killed in a shooting at a Colorado supermarket, including a police officer. Boulder police Chief Maris Herold said at a news conference Monday night that a suspect is in custody and is getting medical treatment. Police say they’re still investigating and didn’t have details on a motive. The officer who was killed was 51-year-old Eric Talley. He had been with Boulder police since 2010. Identities of the other nine victims were not disclosed Monday night as police were still notifying their family members. Patty Nieberg, James Anderson and Colleen Slevin reported.

Imagine just going to the grocery store…and not coming home. But thank goodness we continue to hide behind what we THINK the Founding Fathers imagined when crafting the 2nd amendment. So done. #Colorado

Every single criminal was once a person with “no previous experience being jailed”. https://t.co/lvKmqQBX6k

A shooting in Boulder, Colorado

A gunman opened fire at a grocery story in Boulder, Colo., on this afternoon, killing 10 people, including a police officer, the authorities in Boulder said.

A suspect was in custody and was injured during the shooting, said Cmdr. Kerry Yamaguchi of the Boulder Police.

Listen to John Rothmann’s segment below for more information.

Maybe we should just keep the flag half-mast permanently. (Sigh)

ABC News Correspondent Alex Stone has the latest on this developing story on The Chip Franklin Show.