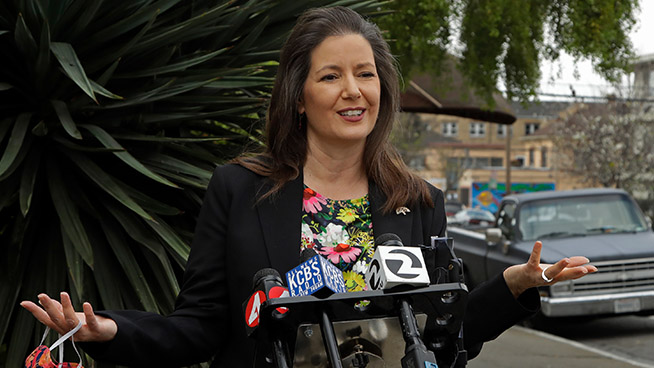 FILE – In this April 10, 2020, file photo, Oakland Mayor Libby Schaaf speaks at a news conference in Oakland, Calif. Mayor Schaaf on Tuesday, March 23, 2021, announced a privately funded program that will give low-income families of color $500 per month with no rules on how they can spend it. The program in Oakland is the latest example of “guaranteed income,” an idea that giving poor people a set amount of money each month will ease the stresses of poverty that contribute to poor health and hinder their ability to find full-time work. (AP Photo/Ben Margot, File)

SACRAMENTO, Calif. (AP) — The mayor of Oakland, California, has announced a privately funded program to give low-income families of color $500 a month with no rules on how to spend it. The program is one of the largest forms of a guaranteed income project the U.S. so far. Its idea is that giving poor people a set amount of money each month will ease the stresses of poverty that contribute to poor health and hinder their ability to find full-time work. The idea isn’t new, but it has received attention recently after progressive mayors launched similar programs across the country. The first program was launched in Stockton, California, in 2019. Adam Beam reported.

“Boosted by Stockton’s results, our goal is to add to the body of evidence that unrestricted cash to our lowest-income residents – and particularly those who’ve suffered from historical racial inequity – can improve outcomes + change systems.” Schaaf continued to tweet.

“Our vision is an Oakland that has closed the racial wealth gap and where all families thrive,” Schaaf said of the Oakland Resilient Families program. “We believe that guaranteed income is the most transformative policy that can achieve this vision and whose time has come.”

The program is being paid for by the city of Oakland and from private donations from Blue Meridian Partners, a philanthropic organization focused on poverty. Thus far, the organization has raised more then $6.7 million, 80% of which will go directly to residents. The SF Chronicle explained, The Family Independence Initiative, a national nonprofit based in Oakland focused on fighting poverty, will run the program, which will begin with East Oakland residents before opening applications to other parts of the city.

“The program sounds very promising,” said Candice Elder, executive director of East Oakland Collective, a community organization that helps homeless and low-income people. “What we learned from the COVID-19 pandemic is how the community needs universal income… with no strings attached. And I’m glad Oakland is following in the footsteps of Stockton.”