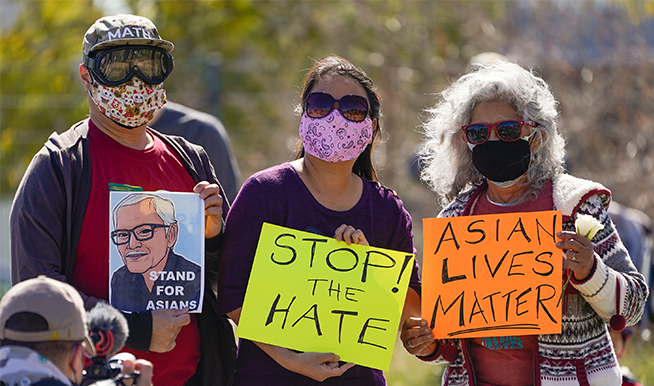 A man holds a portrait of late Vichar Ratanapakdee, left, a 84-year-old immigrant from Thailand, who was violently shoved to the ground in a deadly attack in San Francisco, during a community rally to raise awareness of anti-Asian violence and racist attitudes, in response to the string of violent racist attacks against Asians during the pandemic, held at Los Angeles Historic Park near the Chinatown district in Los Angeles, Saturday, Feb. 20, 2021. (AP Photo/Damian Dovarganes)

A recently published report from the San Francisco Chronicle has brought to the forefront that the campaign to recall California Governor Gavin Newsom has been using racist, anti-Asian language and that the campaign really is “with a capital R,” as the Governor’s team put it last week.

The report comes out as the nation becomes mired in ever-increasing violence against Asian Americans. Campaign organizers have been using phrases like “Chinese virus” and the  “Communist Chinese Party (CCP) Virus” on their website and other material to describe the novel coronavirus.

“Funding Illegal Alien owned businesses in the amount of $50 Million because CA received federal funding for the Communist Chinese Party (CCP) Virus [Covid-19/Corona],” the website listed as a reason to recall the now Governor.

Many of these terms and attitudes were first fermented by President Trump in the early days of the COVID-19 pandemic. Many Asian American groups have blamed his attitudes as fuel for anti-Asian attitudes in the past year.

“This is the racist rhetoric that is directly responsible for the surge in anti-Asian harassment, verbal harassment, and physical attacks,” said Cynthia Choi, co-founder of the advocacy group Stop AAPI Hate. “It’s deeply painful, and especially in the wake of the Atlanta murders where six of the eight victims were Asian women.”

San Francisco, whose population is 36% Asian, has been particularly troubled as it even made national headlines for recent violence against its Asian American residents. While Mayor London Breed has condemned the violence and increased police presence in the city, the violence continues to climb.

However, the Recall Newsom campaign has since retracted its statements and insisted that Newsom himself was the divisive one.

“Our campaign is not about dividing Californians, it’s about uniting California by removing this divisive governor,” Economy said. “The people will not tolerate nasty divisive manufactured personal attacks by Gov. Newsom.”

Many of the top campaign workers have made racist and pejorative references to the COVID-19 virus, including Stephen Frank, their media relations coordinator, and Robin Emerson McCrea, their chief financial officer. Even Tom Del Beccaro, the former chair of the California Republican Party, has made similar comments.

Randy Economy, a spokesperson for the recall committee, said that any reference made was not meant to offend and is not the stance of the campaign.

However, after the mass shooting of Asian-owned Spas in Atlanta, it is hard to deny that Trump’s language has placed a target on Asian-American communities and conservatives have made them convenient scapegoats for the misery of the last year.

Stop AAPI Hate, a coalition to combat and record Asian American hate crimes, has reported nearly 3,800 cases of violence in the last year, more than 800 of which were committed in California since the start of 2021.