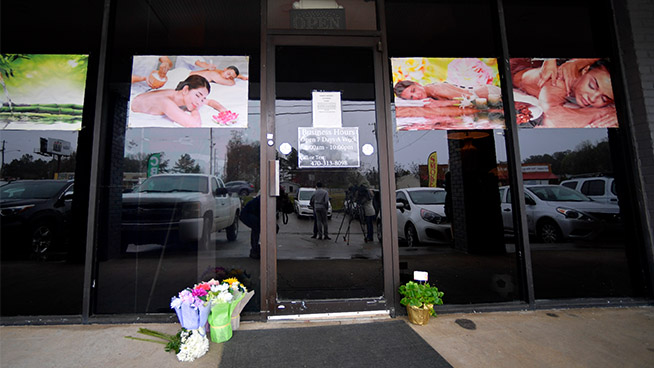 A make-shift memorial is seen outside a business where a multiple fatal shooting occurred on Tuesday, Wednesday, March 17, 2021, in Acworth, Ga. Robert Aaron Long, a white man, is accused of killing several people, most of whom were of Asian descent, at massage parlors in the Atlanta area. (AP Photo/Mike Stewart)

The black vice president of the San Francisco school board is refusing to resign amid fierce backlash over a series of racist tweets she made against Asian Americans in 2016 – including that they use “white supremacist thinking” to “get ahead.”

In the thread of tweets from Dec. 4, 2016, Collins said that Asian American teachers, students and parents had used “white supremacist thinking to assimilate and ‘get ahead.’”

Should the Biden administration move forward with a massive infrastructure bill?

White House officials are preparing to present President Biden with a roughly $3 trillion infrastructure and jobs package that includes high-profile domestic policy priorities such as free community college and universal prekindergarten, according to three people familiar with internal discussions.

After completing the $1.9 trillion coronavirus relief package this month, Biden administration officials are piecing together the next major legislative priority. Although no final announcement has been made, the White House is expected to push a multitrillion-dollar jobs and infrastructure plan as the centerpiece of the president’s “Build Back Better” agenda.

That effort is expected to be broken into two parts — one focused on infrastructure, and the other focused on other domestic priorities such as growing the newly expanded child tax credit for several years. The people, who spoke on the condition of anonymity to describe private conversations, stressed that planning was preliminary and subject to change. Some aides said that the package’s final price tag remains unclear.