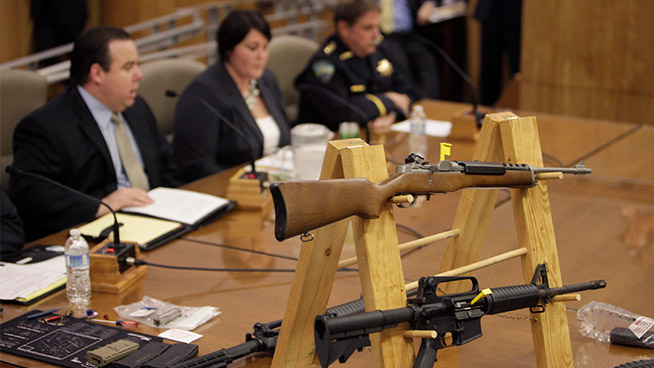 FILE – In this Jan. 29, 2013, file photo, semi-automatic rifles and large capacity magazines are displayed during a joint legislative informational hearing about gun control at the Capitol in Sacramento, Calif. A federal appeals court said Thursday, Feb. 25, 2021, that it will reconsider a three-judge court’s split ruling last year throwing out California’s ban on high-capacity ammunition magazines. An 11-member panel of the 9th U.S. Circuit Court of Appeals will rehear the case after two members of the three-judge appellate panel ruled in August that California’s ban on magazines holding more than 10 bullets violates the U.S. Constitution’s protection of the right to bear firearms. (AP Photo/Steve Yeater, File)

“We won’t solve this crisis with prosecutions after funerals, we need prevention before shooting”

On today’s edition of The Ronn Owens Report, in the aftermath of this week’s mass shooting in Boulder, Colorado, Ronn says it’s crucial for Republicans and Democrats to look at gun control as a safety issue and not a political one.