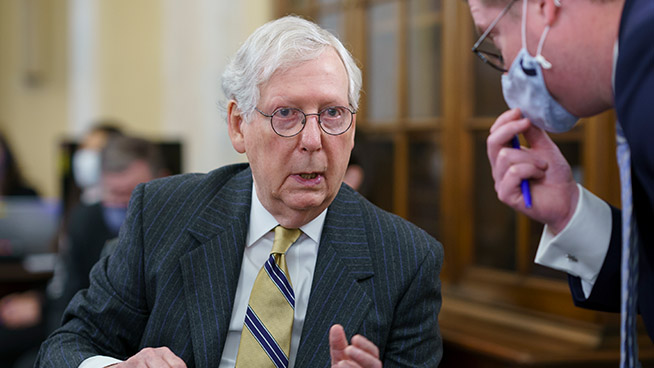 Senate Minority Leader Mitch McConnell, R-Ky., turns to an aide as the Senate Rules Committee holds a hearing on the “For the People Act,” which would expand access to voting and other voting reforms, at the Capitol in Washington, Wednesday, March 24, 2021. The bill has already passed in the House. (AP Photo/J. Scott Applewhite)

Senate Republican leader Mitch McConnell says it’s a “big lie” to call the new voting law in Georgia racist and he warned big business to “stay out of politics” after major corporations and even Major League Baseball distanced themselves from the state amid vast public pressure.

Should we be worried?

Russia is building up military equipment in the Arctic and testing new weapons there as it looks to assert dominance of the region.

Russia is building upon military bases, hardware and underground storage facilities on its Arctic coastline, with bombers, MiG31BM jets and new radar systems close to the Alaskan coast.

Included in the buildup is the Poseidon 2M39 unmanned stealth torpedo, a so-called super-weapon powered by a nuclear reactor. Russia quickly developing the armament and tested it in February, with further tests planned this year, according to Russian state media.