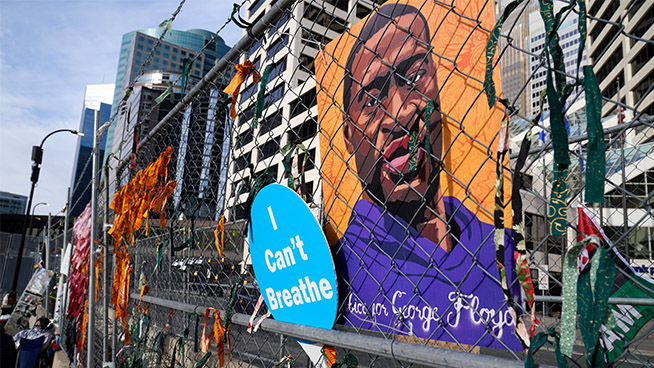 A picture of George Floyd hangs on a fence outside the Hennepin County Government Center, Tuesday, March 30, 2021, in Minneapolis where the trial for former Minneapolis police officer Derek Chauvin continues. Chauvin is charged with murder in the death of Floyd during an arrest last May in Minneapolis. (AP Photo/Jim Mone)

The world became aware of Floyd’s death due to one individual’s released video of the incident and since then protests have not stopped. Across all fifty states and numerous countries, people have been protesting for George Floyd and the need to end police brutality, including the Bay Area.

The trial began over two weeks ago for Officer Derek Chauvin, accused in the death of George Floyd. KGO hosts Chip Franklin and Pat Thurston cover trial updates as the defense opened its case Tuesday.

Latest on Derek Chauvin’s trial on The Pat Thurston Show.

Use of Force Expert at Chauvin Trial Today