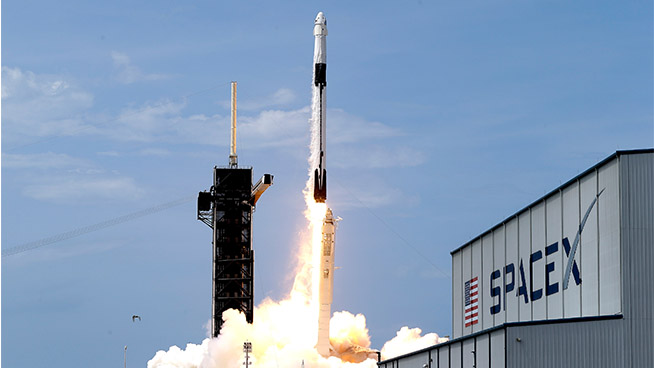 FILE – In this May 30, 2020, file photo, a SpaceX Falcon 9, with NASA astronauts Doug Hurley and Bob Behnken in the Dragon crew capsule, lifts off from Pad 39-A at the Kennedy Space Center in Cape Canaveral, Fla. For the first time in nearly a decade, astronauts blasted towards orbit aboard an American rocket from American soil, a first for a private company. (AP Photo/John Raoux, File)

NASA and SpaceX will send their second commercial crew rotation to the International Space Station on Friday, April 23 at 5:49 a.m. EDT.

NASA Astronaut Jeff Williams joins The Morning Show with Nikki Medoro to preview the mission. Williams is a veteran of four space flights and formerly held the American record for most days spent in space.

“I never got tired of studying the Earth,” said Williams speaking of his time in space.

Launch Update 🚀 @NASA and @SpaceX now are targeting Friday, April 23 at 5:49 a.m. ET for the launch of the Crew-2 mission to the @Space_Station due to unfavorable weather conditions along the flight path on Thursday.

Listen to the full conversation between Nikki Medoro and Jeff Williams below.