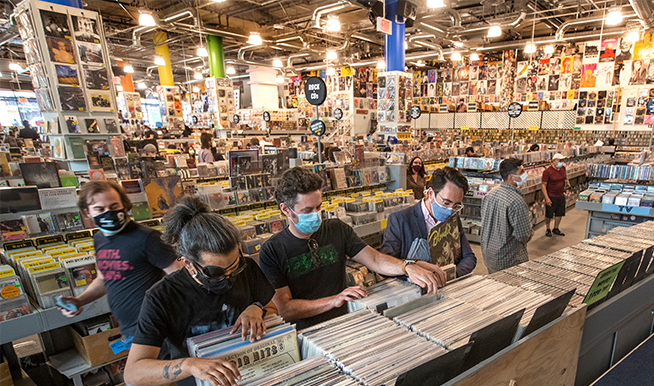 Customers browse through rare, rock themed vinyl records inside Amoeba Music on Hollywood Blvd. in Hollywood that reopened in a new location after being shuttered for a year due to the coronavirus outbreak. (Mel Melcon / Los Angeles Times via Getty Images)

Out of the slew of terrible headlines that we’ve all become numb to over the last year, one story from the SF Gate jumped out as a beacon of hope:

This story of the harrowing journey of the local music icon gives hope for others businesses struggling through the pandemic. But what did Amoeba find? What revelation had come upon the store amongst all the struggling businesses? The answer is we still don’t really know, but product manager Tony Green seemed to have an idea.

“People were missing a space like ours in their lives,” Green told SF Gate. “They still want the experience of being part of a community and for immediate access to records. A record geek loves Amoeba because there are so many opportunities for real-life serendipity.”

The 24-year-old store had been able to cling to life as the state began to relax its restrictions and suddenly sprung back with surprising vigor. Though, the journey was a painful one, as its three stores and 400 employees, had been furloughed in the early days of the COVID-19 pandemic.

As 2020 wore on the store became a shell of its former self and the foot traffic that they depended on was either forbidden to enter or had all but been depleted as the community adhered to lockdown orders. However, two PPP loans and a wildly successful GoFundMe campaign floated them through to December. But even then things weren’t looking great.

“We were very concerned going into December,” Green said.

As things seemed to get better, a surge of cases brought down any hope that the local chain might have. Another lockdown brought a looming financial crisis onto the store.

However, in January cases decreased and San Francisco, Berkley, and the Bay Area as a whole started to loosen their restrictions, and newly populated parklets brought much-needed salvation.

“We certainly had our dark days of wondering whether we would survive all of this,” Co-founder Marc Weinstein told SF Gate, reflecting on the events of the last year. “There was a tremendous degree of uncertainty, especially not knowing what the government might be offering in terms of assistance or help.”

According to Green the store, which is currently only open four days a week, has in the last couple of months made a complete 180 and that even with limited hours they were making more in a week than they did even in 2019.

“I woke up this morning with a strange feeling,” Green said. “I realized it was job security. We’ve been incredibly surprised by the level of support and business.”

Amoeba’s three locations are all currently in Orange Tier counties (San Francisco, Berkeley, and Los Angeles) and have begun allowing limited shoppers in its stores.