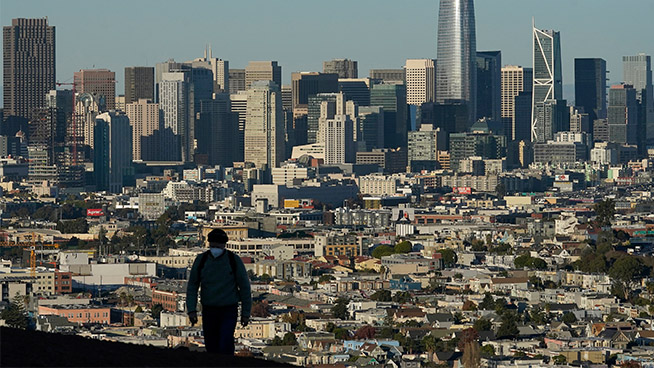 FILE – In this Dec. 7, 2020, file photo, a person wearing a protective mask walks in front of the skyline on Bernal Heights Hill during the coronavirus pandemic in San Francisco. California’s population has declined for the first time in its history. State officials announced Friday, May 7, 2021, that the nation’s most populous state lost 182,083 people in 2020. California’s population is now just under 39.5 million. (AP Photo/Jeff Chiu, File)

SACRAMENTO, Calif. (AP) — California’s population declined in 2020 for the first time since state officials have been measuring it.

State officials announced Friday that the nation’s most populous state lost 182,083 people in 2020. California’s population is now just under 39.5 million. It had shown only very small annual increases for the last several years.

Last week, the U.S. Census Bureau announced the state would lose a congressional seat for the first time because it grew more slowly than other states during the past decade. State officials blamed the loss on a declining birth rate, reductions in immigration and an increase in deaths because of the coronavirus.