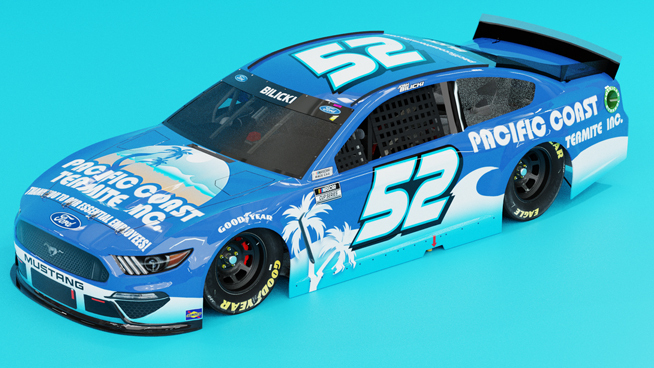 ORANGE, Calif.  – Pacific Coast Termite, a leading California-based termite and pest control company, has agreed to a one-race sponsorship of Josh Bilicki and Rick Ware Racing as part of a grand gesture to thank its essential workers for their work during the pandemic.

The #52 Ford Mustang will be ablaze in blue and white for the NASCAR Cup race in Sonoma on June 6, with a special message to honor the men and women at Pacific Coast Termite, who were deemed essential workers and answered an unprecedented volume of calls while families were under stay-at-home orders.

“Given the work-from-home mandate in the state last year, homeowners recognized and addressed neglected or unnoticed needs around their home,” said Dennis Wilson, co-owner of Pacific Coast Termite. “Given our company’s designation as an essential service, our employees remained on the job helping homeowners with their termite and pest control needs. We want to honor their commitment and dedication and felt there was no better way than in grand fashion sponsoring Josh in his first full-time season in the most popular motorsport in America.”

Pacific Coast Termite’s unique approach to termite control without the need of leaving or tenting the house was a welcome relief to homeowners in an already stressful situation due to the pandemic. Coupled with an unmatched customer service and protocols that far exceeded requirements, the company and its employees remained on the job putting themselves at risk.

“We can’t thank our employees enough for remaining dedicated to their trade during such trying and difficult times, putting their own well-being aside to help fellow Californians,” said James Grande, co-owner of Pacific Coast Termite. “When talking to Josh, we sensed he shared that same appreciation and was fully supportive to recognize our employees.”

Beyond the presence on Bilicki’s car during the race, the 26-year-old driver from Wisconsin will make a special appearance at Pacific Coast Termite’s Northern California headquarters in Fremont, Calif. “Dennis and James really care about their employees, so we are going to visit some of the Pacific Coast Termite team before the race,” said Bilicki. “They’ve said their employees have the same commitment to their work as I do for mine. Hopefully I can honor them with a great performance on Sunday.”