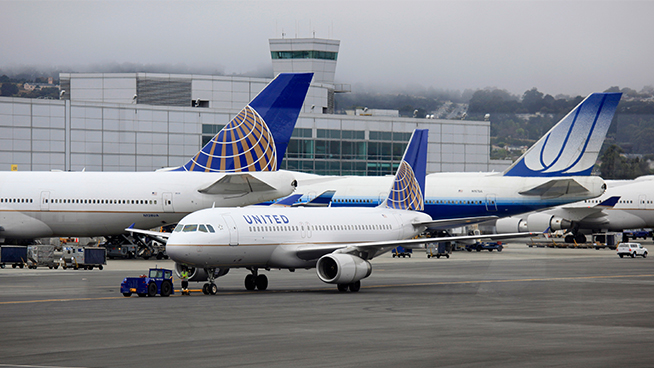 A worker walks on the tarmac past a number of United Airlines planes at San Francisco International Airport in San Francisco, Wednesday, July 13, 2011. Bay-area customers of United Airlines and Continental Airlines, subsidiaries of United Continental Holdings, Inc., are seeing a new look at SFO Wendesday as the company continues to provide a more consistent travel experience for customers. United and Continental have completely transformed airport check-in and boarding areas with new airport signage reflecting the new United’s branding.·San Francisco is the second of United’s 10 hub airports to get the new design. (AP Photo/Eric Risberg)

Smoke was seen coming out of the top floor of the domestic parking garage at San Francisco International Airport early Tuesday morning.

Flames were first reported at 6:15am and the firefighters contained the situation by 7:30am, said airport spokesperson Doug Yakel.

The fire affected eight cars and one person was treated for smoke inhalation. Flights have not been affected by the fire.

The domestic parking garage is open, the cause of the fire is currently unknown.