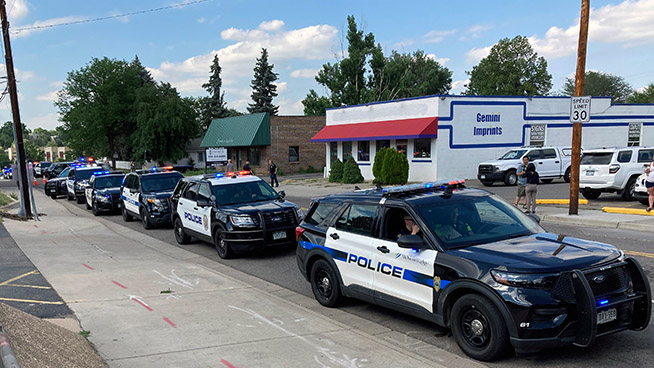 About 30 police cars line up for a procession in honor of an officer who was fatally shot in Arvada, Colo., Monday, June 21, 2021. A gunfight between two men and police officers at a shopping district in a Denver suburb left an officer and one of the suspects dead, authorities said Monday. (AP Photo/Colleen Slevin)

Oakland police say the deadly weekend shooting at Lake Merritt that killed a man and wounded seven others was not random and is tied to San Francisco gangs.

“We believe that individuals came to the city of Oakland and committed these violent acts,” said Oakland Police Chief LeRonne Armstrong.

According to Chief Armstrong, there were several shooters and firearms at the 2200 block of Lakeshore Avenue. An estimated 5,000 people were present and multiple shots were fired.

Chief Armstrong said the amount of people posed, “Extreme risk and hazards to those firefighters as well as those emergency responders. We also had groups of people that were very unsympathetic to the incident…people continued to dance in and around ambulances, [halting] them from leaving the area to get people to hospitals so that they could be treated.”

@oaklandpoliceca Chief Armstrong briefing media about the #LakeMerritt shooting. Armstrong says this was not a random shooting. This was a gang related shooting. There were multiple shooters who came from #SanFrancisco. 8 victims in total. The youngest victim was 16. @nbcbayarea pic.twitter.com/kyhDH0XRKW

It’s heartbreaking a joyous occasion at Lake Merritt was marred by violence. Police in the immediate area tended to victims and apprehended two people with firearms near the scene. Our thoughts are w/ the family + friends of victims, and I thank our officers for a quick response. https://t.co/MV1D2zTYTp