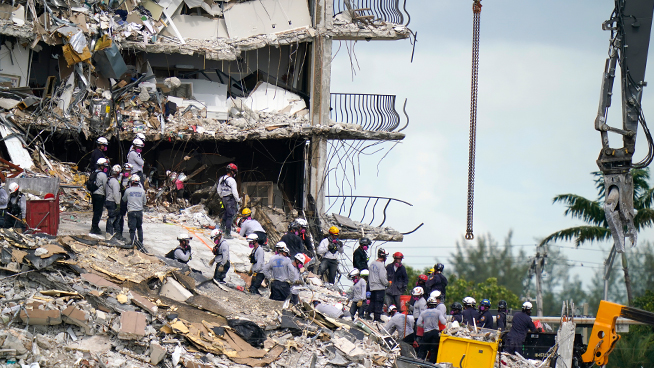 Rescue workers search in the rubble at the Champlain Towers South condominium, Monday, June 28, 2021, in the Surfside area of Miami. Many people are still unaccounted for after the building partially collapsed last Thursday. (AP Photo/Lynne Sladky)

(CNN) – At least 10 people are dead and 151 people are unaccounted for after a residential building partially collapsed in Surfside, Florida, Thursday.

Search and rescue teams continue to race to find survivors. The missing are from at least nine countries, including six Latin American countries, and multiple faith communities. Search and rescue efforts are complex and will take time, Raide Jadallah, the assistant fire chief of operations for Miami-Dade Fire Rescue, said on Monday, describing the dangerous situation crews are faced with as they look for survivors.

He said on Sunday as crews were looking through the rubble, a rescuer fell 25 feet down the pile of collapsed building.

“That’s a perfect example of the situation we’re dealing with. This was, again, witnessed by the family members themselves at the site,” he said. “It’s not an issue of we can just attach a couple of cords to a concrete Boulder and lift it and call it a day.”

Jadallah described the rubbles of concrete being the size of basketballs and baseballs. He said the rescue efforts are slow-moving because safety for crews and for the victims themselves are at the forefront.

ABC News Correspondent Lionel Moise is live in Surfside, Florida, and brings The Morning Show with Nikki Medoro the latest on the rescue efforts there. Listen to the full conversation below.