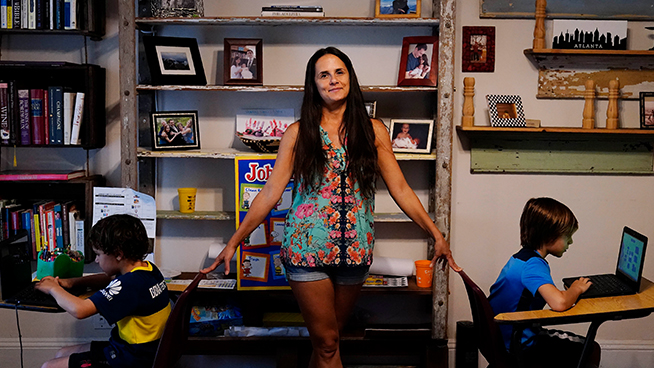 Anna Hamilton, 43, center, poses for a photograph with her sons, Henry, 6, left, and Adrian, 7, right, in their home on Monday, Aug. 24, 2020, in Decatur, Ga. Hamilton is taking leave from her job at a small investment firm where she has worked for 12 years so she can guide her children through remote schooling. Looking back, she sees how childcare responsibilities, doctor visits, school pick-ups, lining up babysitters, often fell on her as the parent with the more flexible job. (AP Photo/Brynn Anderson)

As companies begin asking employees to return to the office many individuals are realizing the benefits of working from home.

Iceland saw the advantage back in 2015 and conducted trials for four years from 2015 to 2019. NPR reported, “Workers went from a 40-hour weekly schedule to 35- or 36-hour weekly schedules without a reduction in pay. The trials were launched after agitation from labor unions and grassroots organizations that pointed to Iceland’s low rankings among its Nordic neighbors when it comes to work-life balance.”

“Now, research out of Iceland has found that working fewer hours for the same pay led to improved well-being among workers, with no loss in productivity.,” NPR continued, “In fact, in some places, workers were more productive after cutting back their hours.”

ABC News Correspondent Jim Ryan joins guest host Chip Franklin to talk about Iceland’s experiment with the four-day work week and the many benefits they found.  Also, trying to get the economy back to “normal” post-pandemic.