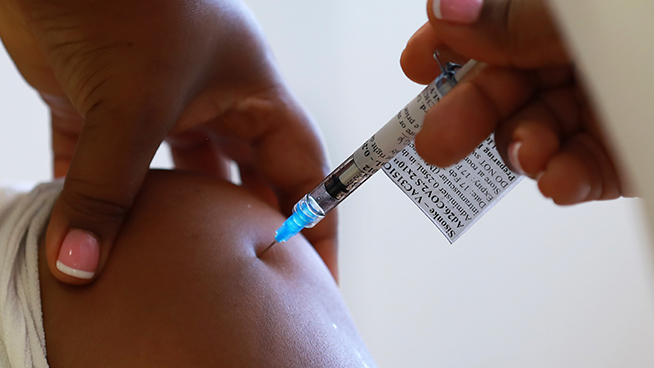 FILE – In this Feb. 17, 2021, file photo, a health care worker receives a Johnson & Johnson vaccine at a hospital in Khayelitsha, Cape Town, South Africa. South Africa has suspended giving the Johnson & Johnson vaccine as a “precautionary measure” following the FDA decision in the United States to pause the use of the vaccine while very rare blood clot cases are examined. (AP Photo/Nardus Engelbrecht)

(CNN) – Federal health officials are investigating the possibility that Johnson & Johnson’s coronavirus vaccine might slightly raise the risk of a rare neurological complication known as Guillain-Barré syndrome, a spokesperson from the US Centers for Disease Control and Prevention said in a statement to CNN on Monday.

The Washington Post reported the FDA is preparing to announce a new warning that links the vaccine to the syndrome.

CNN has reached out to Johnson & Johnson and FDA for comment.

Even if the vaccine does raise the risk of the syndrome, it’s still better to get vaccinated against the coronavirus, the CDC stressed.

“GBS is a neurological disorder in which the body’s immune system damages nerve cells, causing muscle weakness or in the most severe cases paralysis. Each year in the United States, an estimated 3,000 to 6,000 people develop GBS; it is typically triggered by a respiratory or gastrointestinal infection. Most people fully recover from GBS,” the CDC spokesperson said.

“Reports of GBS after receipt of the J&J/Janssen COVID-19 Vaccine in the Vaccine Adverse Event Reporting System (VAERS) are rare, but do likely indicate a small possible risk of this side effect following this vaccine. Around 100 preliminary reports of GBS have been detected in VAERS after 12.8 million doses of J&J/Janssen COVID-19 Vaccine administered. These cases have largely been reported about two weeks after vaccination and mostly in males, many aged 50 years and older.”

The same pattern is not seen with the other two vaccines authorized in the United States, made by Moderna and Pfizer. The spokesperson said the CDC’s Advisory Committee on Immunization Practices would discuss the matter in an upcoming meeting.

“In the United States, nearly all COVID-19 hospitalizations and deaths are now occurring in unvaccinated people. The risk of severe adverse events after COVID-19 vaccination remains rare. Everyone age 12 years and older is recommended to receive a COVID-19 vaccine,” the statement said.

The CDC and FDA briefly paused use of the Johnson & Johnson vaccine earlier this year because of a risk of a rare type of blood clotting complication but lifted the pause in April after determining the risk was low and the condition was treatable. The vaccine’s label was updated to warn about the risk.