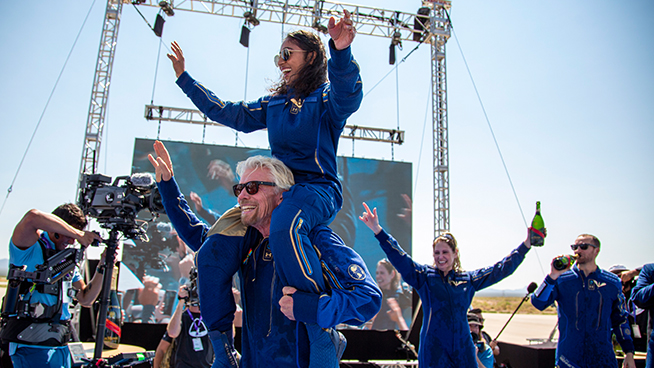 TRUTH OR CONSEQUENCES, N.M. (AP) — Thrill-seeking billionaire Richard Branson has reached space aboard his own winged rocket ship, bringing astro-tourism a step closer to reality. The feat vaults the nearly 71-year-old Branson past fellow billionaire and rival Jeff Bezos, who is planning to fly to space in a craft of his own nine days from now. Branson and five crewmates from his Virgin Galactic space tourism company reached an altitude of 53.5 miles (86 kilometers) over the New Mexico desert — enough to experience three to four minutes of weightlessness and see the curvature of the Earth — and then glided back home to a runway landing.

Mark Thompson explains how Virgin Galactic founder Richard Branson made it so space this weekend. Bret Burkhart then joins Mark to talk about people acting unruly on flights: a woman duct-taped to a seat, passengers who were forced to put their hands on their head for over an hour & a Florida man threatening to blow up the Fort Lauderdale Airport. Listen to the full conversation below.