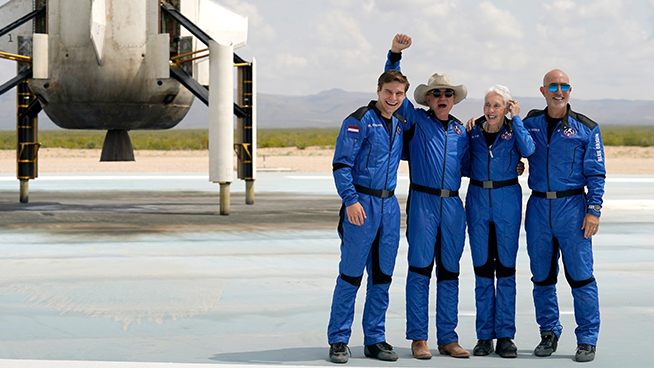 Jeff Bezos, the world’s richest man, went to space and back Tuesday morning on an 11-minute, supersonic joy ride aboard the rocket and capsule system developed by his space company, Blue Origin.

Riding alongside the multibillionaire were Bezos’ brother, Mark Bezos; Wally Funk, an 82-year-old pilot and one of the “Mercury 13” women who trained to go to space in the 20th century but never got to fly; and an 18-year old recent high school graduate named Oliver Daemen who was Blue Origin’s first paying customer and whose father, an investor, purchased his ticket.

With Jeff Bezos’ successful mission to space, Nikki Medoro asks if we should impressed by this feat and what it will mean for the future…will it lead to space tourism? Is this a good use of billions of dollars?

The Morning Show with Nikki Medoro covers Jeff Bezos’ Blue Origin rocket effort in the Billionaire Space Race. Also, ABC White House Correspondent Karen Travers tells us why President Biden doesn’t see the stock market as a means by which to judge the health of the economy.

ABC’s Alex Stone reports that the second Billionaire to go to the edge of Space in their privately funded rocket successfully spent two minutes in Zero G.