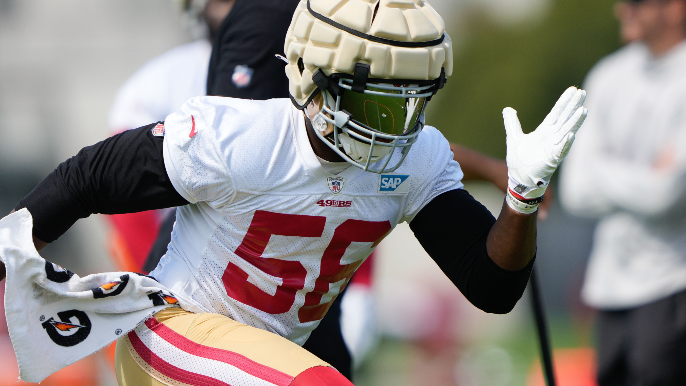 We’re starting to get into a rhythm here at 49ers camp on Day 3. Friday was pretty clearly the shakiest day for rookie quarterback Trey Lance, which is to say, that’s to be expected and might not mean all that much, if anything. One point worth reminding with these reports is that they are observations solely from that individual day of practice. Lance has looked mostly impressive so far, he just had some poor throws and decisions on this day.

We won’t be listing any sort of stat line for the quarterbacks — at the very least until pads and situational drives are incorporated in 11-on-11s — but there were at least four poor or questionable throws by Lance on Friday. He underthrew River Cracraft down the left sideline, and Marcell Harris, who’s looked dynamic in a pure linebacker role, leaped to break it up.

His next throw was a near interception after Arden Key — who had at least one would-be sack and created pressure on at least a handful of occasions — forced Lance out of the pocket and on the run. It should have been a throwaway, but Lance tried to fit the ball into a nonexistent window to Josh Pederson, who had to play defensive back in order to break up a near interception by Azeez Al-Shaair, who’s showing all sorts of range in camp.

On his final set, Lance completed a roughly 45-yard pass to Deebo Samuel, which didn’t really have any business in being completed. It came out of Lance’s hand wobbly and Jared Mayden took a hyper-aggressive and ill-conceived line towards the ball, missing it completely. Samuel caught it while turned fully around, then headed untouched for a theoretical touchdown.

Lance’s last throw was the closest to being intercepted, with second-year linebacker Jonas Griffith — who’s built like a Mack truck but with ridiculous athleticism for his frame — nearly picked him off over the middle. Lance was trying to feather a ball over to Brandon Aiyuk on a crosser over the middle and seemed to lose track of Griffith, who nearly made him pay.

To be clear, Lance also had some flawless, dart throws, which he’s done in every practice, including OTAs. He was also let down by Richie James Jr., who dropped a pinpoint, line-drive pass; it was James’ second drop of the day after robbing Josh Rosen of a completion on a nice, low throw into a tight window over the middle.

Rosen, by the way, followed that throw with another nice tight window throw to Samuel. He finished his day with a completion to Mohamed Sanu over the middle but directly preceded that with a near interception to rookie corner Deommodore Lenoir, who dropped the would-be interception as Rosen launched for a streaking, but double-covered Kevin White.

Both Lance and Jimmy Garoppolo drew defenders offsides or into the neutral zone, but Garoppolo was not all that impressive either, although he had far fewer mistakes than Lance. He was pressured heavily, as Kyle Shanahan mentioned after practice.

“I thought the D-line was going today,” Shanahan said. “I think it’s been a real competitive camp. I think the defense probably got the best of the O today.”

Harris had his second pass breakup of the day, this time against Garoppolo, basically ripping the ball away from George Kittle on a throw over the middle which you’d normally expect Kittle to catch.

Like Lance, he had a few nice completions, but with fewer mistakes. He was robbed by that Harris PBU, an embarrassing drop in the flat by Trey Sermon (pressured by Al-Shaair), and what looked like holding by K’Waun Williams on Sanu, though no flag was thrown. Garoppolo hooked up with Sanu on a couple of occasions and seems to have a good sense of timing with him on those slants over the middle which both love.

Again, it was the defense’s day. Marcell Harris had those two PBUs, and looks like he’s much more comfortable playing coverage in tighter windows than in managing the acres of space he had to in more of a center fielder role in prior seasons.

As a whole, the linebacker group looks deep. You pretty consistently see Fred Warner blitzing from different angles and employing different timings, and closing down outside running plays as soon as the ball hits the equator. Dre Greenlaw is usually just behind him, ready to clean up anything that might get past the All-Pro. As mentioned, Al-Shaair is looking rangy, too, and keeps coming up with plays on the ball at the point of contact and catch point. Griffith has also impressed early as well, and there’s no one in the group at this juncture who looks out of their depth.

Samson Ebukam had at least two would-be sacks and was causing serious problems when he didn’t have to line up against Trent Williams, who’s as absurd and staunch as ever. Arden Key also had at least one would-be sack of his own, as did Anthony Zettel. Those two might have a little bit of a battle on their hands for the final spot on the edge, depending on how many defensive linemen the 49ers keep.

Zach Kerr looks like the bargain signing of the season at this point, and blew up or interrupted multiple running plays, meeting Elijah Mitchell in the backfield almost as soon as his hands touched the football on one rep.

Maurice Hurst did not participate on Friday, with Kyle Shanahan saying afterwards that he has a “slight ankle” injury and is currently day-to-day. MyCole Pruitt was also out, and is expected to be out “for a while” with a calf injury. Both Nick Bosa and Jalen Hurd sat out with scheduled “maintenance” days.