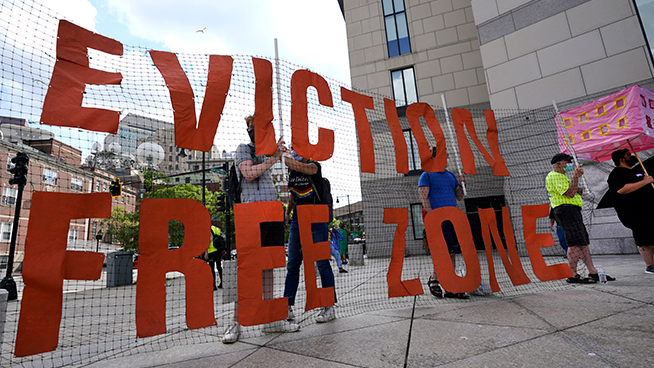 In this June 9, 2021, photo, people hold a sign during a rally in Boston protesting housing eviction. The Biden administration announced Thursday, July 29 it will allow a nationwide ban on evictions to expire Saturday, arguing that its hands are tied after the Supreme Court signaled it would only be extended until the end of the month. The White House said President Joe Biden would have liked to extend the federal eviction moratorium due to spread of the highly contagious delta variant. Instead, Biden called on “Congress to extend the eviction moratorium to protect such vulnerable renters and their families without delay.” (AP Photo/Elise Amendola)

(CNN) — Congressional Democrats are increasing pressure on their party’s leadership to act on the now-expired federal eviction moratorium as the White House shifts its focus to unspent housing assistance after the order ended and left millions of renters in limbo.

The eviction issue has exposed a major and rare disconnect between President Joe Biden and his party on Capitol Hill that appeared no closer to resolution Sunday night nearly a day after the eviction moratorium expired. Each side privately accused the other of misreading the situation, but the resulting agony for tenants facing potential removal from their homes amounted to a serious failure in governance.

House Democratic leaders on Sunday night pressured the Biden administration to renew the eviction moratorium, calling the action “a moral imperative to keep people from being put out on the street which also contributes to the public health emergency,” according to a statement from House Speaker Nancy Pelosi, Majority Leader Steny Hoyer, Majority Whip James Clyburn and Assistant Speaker Katherine Clark. But, as CNN has previously reported, the White House’s legal team no longer believes the administration has the authority to renew the moratorium after Supreme Court Justice Brett Kavanaugh said in a June opinion that he was only upholding the last extension because it would expire on July 31.

ABC’s Andy Field on the ramifications of this expiration date.

The Eviction Moratorium will likely not get extended. National eviction protection expired Saturday at midnight and California protection will expire on September 30th. John Rothmann hears your thoughts on the matter!