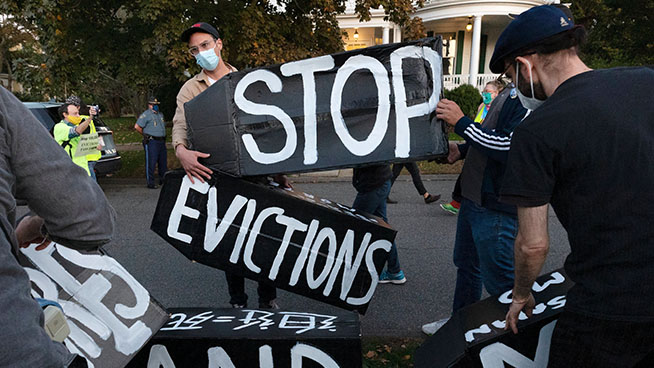 FILE – In this Oct. 14, 2020, file photo, housing activists erect a sign in Swampscott, Mass. The Biden administration announced Thursday, July 29, 2021, it will allow a nationwide ban on evictions to expire Saturday, arguing that its hands are tied after the Supreme Court signaled it would only be extended until the end of the month. The White House said President Joe Biden would have liked to extend the federal eviction moratorium due to spread of the highly contagious delta variant. Instead, Biden called on “Congress to extend the eviction moratorium to protect such vulnerable renters and their families without delay.” (AP Photo/Michael Dwyer, File)

Congressional Democrats are increasing pressure on their party’s leadership to act on the now-expired federal eviction moratorium as the White House shifts its focus to unspent housing assistance after the order ended and left millions of renters in limbo.

The eviction issue has exposed a major and rare disconnect between President Joe Biden and his party on Capitol Hill that appeared no closer to resolution Sunday night nearly a day after the eviction moratorium expired. Each side privately accused the other of misreading the situation, but the resulting agony for tenants facing potential removal from their homes amounted to a serious failure in governance.

KGO hosts Pat Thurston and Chip Franklin dive deep into the eviction moratorium, focusing on it’s root cause, finger pointing and who is offering to help save the day.

Continued converation of the eviction memorandum on The Pat Thurston Show.

The Rent is Now Due, America

Is Rent Control the Problem?

Rent control is always popular, but Pat Thurston explains why it never works.

ABC New Correspondent, Andy Field joins The Chip Franklin Show on the latest in the battle to deliver on promises from Trump administration and what Biden’s administration is doing with our excess vaccines.