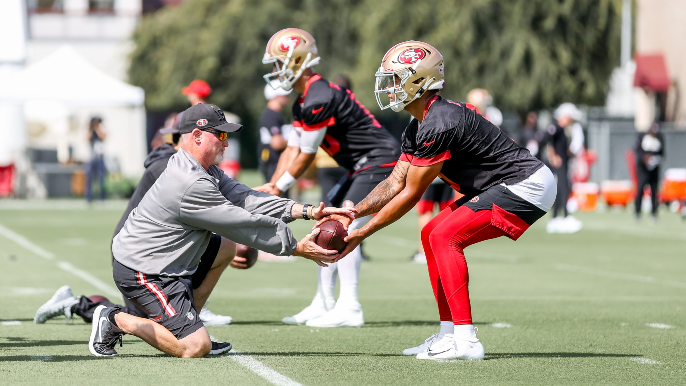 The 49ers returned to practice on Tuesday after an off day and, well, looked like they were coming back from an off day. Not one quarterback on the roster looked stellar, and in general, it was a less than impressive practice from some of the frequent standouts.

Jimmy Garoppolo opened the day impressively, with a nice touch pass to Trent Sherfield; he navigated the high safety, Jimmie Ward, who was over top of Sherfield, and the underneath linebacker, Dre Greenlaw, extremely well, splitting the difference to find Sherfield. Those high-low splits have been Garoppolo’s most consistently impressive throws, consistently splitting the gaps in the 49ers’ zone defenses.

He also had an encouraging completion to George Kittle coming on a quick play action, lobbing the ball over an (intentionally) unblocked, rushing Arden Key, who couldn’t get his fingertips to the ball. Garoppolo arced it well, leading Kittle to catch it in stride..

Trey Lance had a nice throw of his own, and clearly the best of his practice in a move-the-ball drill. He rolled to his left and found a streaking Trent Sherfield over top of B.W. Webb along the left sideline, hitting him on time for a nice toe-tap and a 34-yard gain. While Garoppolo’s move-the-ball drill was effective, with a healthy dose of completions to George Kittle, Lance’s faltered after that gain, with his second-team receivers failing to separate.

In red zone drills, Lance excelled, going 5-for-5 with three touchdowns, while Garoppolo was 1-for-3 with one clear sack to D.J. Jones (his throw after wasn’t completed, either).

Garoppolo’s lone completion came to Kittle, and he had another nice throw to Brandon Aiyuk on a slant, which Fred Warner — who is absolutely ridiculous, and ruins most of Kyle Shanahan’s plans — crashed down on and broke up. On Garoppolo’s second set, he completely missed a free touchdown in the back corner of the end zone to Deebo Samuel after a Dee Ford offsides. He then overthrew Trey Sermon on a short screen to his right. If you include the Jones sack and the wasted throw on the offsides, he was 1-for-5 in that period.

But the most damning period came in situational red zone drills, when quarterbacks were given six or eight seconds to try and get a touchdown inside in the opposing 10-yard line. Garoppolo had his first throw swatted at the line of scrimmage, then found Deebo Samuel, who pulled out a crafty move on Jason Verrett — turning like he was going to cut in, then giving him a little hesi, and cutting back outside, where he was as close to wide open as you’ll get in the red zone.

Lance made a couple of plays which, uh, frustrated Kyle Shanahan. I’m understating that by quite a bit, because those drills have very specific parameters, and when you do something outside of those parameters, Shanahan doesn’t love it. He was quite unhappy.

On the six-second drill, Lance took too long to release the ball, forcing him off the field. On the eight-second situation, he threw a nice pass to Charlie Woerner in the flat, but Marcell Harris crashed downhill on Woerner for what would have been a tackle inbounds.

What surely didn’t make Shanahan feel any better was that Garoppolo’s eight-second drill, which preceded it, ended up in the hands of Emmanuel Moseley. Moseley seemed to identify to Ward pre-snap to adjust his positioning and play deeper to make it appear like Kittle was open; in reality, Moseley was sitting in the flat, watching Garoppolo’s eyes. As soon as the ball left his hand, Moseley jumped the route and picked Garoppolo off.

Aside from the less than impressive quarterbacking and Warner marauding his way around the field all day, there was the first case of a training camp scuffle.

In one-on-ones, Laken Tomlinson got into it with defensive tackle Kevin Givens. Givens gave Tomlinson a late shove, then Tomlinson literally chased after Givens and they got into it. Then they repped again, which seemed to be a move by coaches encouraging that energy.

That backfired. Both Tomlinson and Givens failed to let go of one another, hands were shoved into the facemask, and they ended up on the ground and had to be separated. Then, in the first rep of 11-on-11s, Tomlinson nearly got into it with Javon Kinlaw, who put his hands up in the air after the play to say “it wasn’t me.”

Shanahan said after that the 49ers are clearly sick of practicing against each other; they’ll get their first chance against another team this Saturday against the Kansas City Chiefs.

Garoppolo then walked over to Tomlinson after the following play to chat with him. Asked about that, Garoppolo said he’s come to expect it from Tomlinson, and that he’s been impressed with the pockets he’s had from the offensive line.

“You’ve got to stop it because it’s practice, but you love to see that out of the guys,” Garoppolo said. “You really do. Laken and all those guys up front, they set the tone for us and they’ve done a great job of that this camp.”

Other notes from practice was the addition of defensive lineman Shalique Calhoun. The 49ers announced that they signed Calhoun and corner Alexander Myres to one-year deals, waiving corner Mark Fields II and offensive lineman Isaiah Williams.

Meanwhile, it doesn’t seem like Jaquiski Tartt (PUP, turf toe) will be back anytime soon, as the 49ers are working out three veteran safeties.

With a couple of injuries amongst their safeties, the 49ers are working out veterans Ha Ha Clinton-Dix, Clayton Geathers, Bradley McDougald and Andrew Sendejo.

Those are players who would likely — or at least have a very good chance to — make the roster. Shanahan said veteran safety Tony Jefferson had a groin and hamstring problem, so they clearly need someone else viable with Tavon Wilson the only real other strong safety.

Meanwhile, it doesn’t sound great for Jalen Hurd. It’s seeming more and more like his time with the 49ers is drawing close to its end. Shanahan said he didn’t practice because he was hurting in his recovery from an ACL tear last training camp, but that “there’s not a lot of time left” and he has to show he can play.

In a conversation with KNBR on Monday, wide receivers coach Wes Welker did not sound exceedingly optimistic when asked about Hurd’s prospects.

“At the end of the day, you have to practice,” Welker said. “You have to get reps. And if you don’t do that, it’s really hard for us to play you.”

In other news, linebacker Demetrius Flannigan-Fowles is in the concussion protocol, while Azeez Al-Shaair was back in pads, working on individual drills on the sideline. The initial concern over a serious injury for him has all but evaporated, and his recovery, as Shanahan said last week, is ahead of schedule.