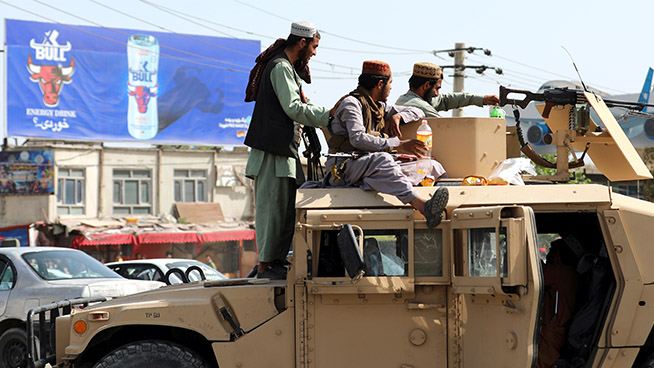 Taliban fighters stand guard in front of the Hamid Karzai International Airport, in Kabul, Afghanistan, Monday, Aug. 16, 2021. Thousands of people packed into the Afghan capital’s airport on Monday, rushing the tarmac and pushing onto planes in desperate attempts to flee the country after the Taliban overthrew the Western-backed government. (AP Photo/Rahmat Gul)

(CNN) – The Taliban edged closer to solidifying control of Afghanistan on Sunday, including entering the presidential palace in Kabul hours after former President Ashraf Ghani fled the country.

The rapidly-evolving situation has prompted confusion and concern as the US and governments worldwide monitor the bitter end to nearly two decades of war.

The presidential palace in Kabul has now been handed over to the Taliban after being vacated just hours earlier by officials of the US-backed government. The Taliban claimed the palace with three Afghan government officials present, according to Al Jazeera, which carried events live. One Taliban security official said there was a “peaceful handover of government facilities ongoing across the country.”

Here’s what you need to know:

Afghanistan’s acting defense minister, General Bismillah Mohammadi, slammed the fleeing president in a brief tweet Sunday, writing: “They tied our hands behind our backs and sold the homeland, damn the rich man and his gang.”

US embassy evacuated. Early Sunday, two sources familiar with the situation told CNN that the plan was to pull all US personnel from the embassy in Kabul over the next 72 hours. But hours later, most US embassy staff had been moved to the Kabul airport for flights out of the country. The US flag is no longer flying over the building.

Do you believe there is anything we can do?

Who’s to blame for this situation? John discusses the Taliban offensive in Afghanistan.