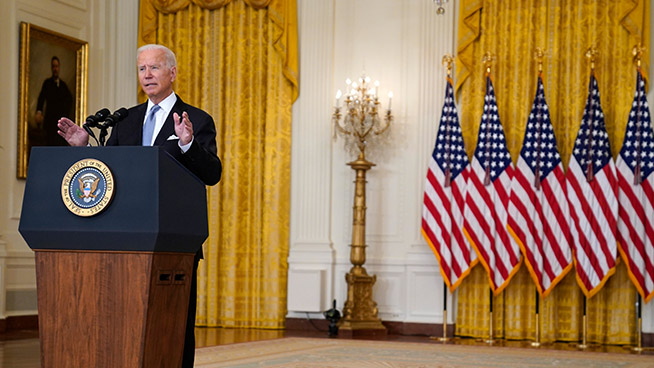 On Sunday, Taliban militants retook Afghanistan’s capital, almost two decades after they were driven from Kabul by US troops.

Although Afghan security forces were well funded and well equipped, they put up little resistance as Taliban militants seized much of the country following the withdrawal of US troops beginning in early July.

Was Afghanistan worth all the American lives lost?

As President Biden appears decisive about pulling U.S. troops out of Afghanistan, The Morning Show with Nikki Medoro discusses if the 20-year war was worth the risk to American troops. Also, GOP candidates in California Recall experience changes.

Mark Thompson recaps what happened in Afghanistan over the weekend.

The fall of Afghanistan

Chris Merrill, filling in for Pat Thurston, asks the listeners, what could have America done different.

President Biden addresses the nation in regards to the tragedy.

Later, Brian Karem, an American journalist and author working as the White House correspondent for Playboy and political analyst for CNN. He’s the author of soon to be published “Free the Press: The Death of American Journalism and How to Revive It”

The recall & more on Afghanistan

Did President Biden do the right thing, asks John Rothmann

The fall of the U.S. backed government in Afghanistan to the Taliban happened faster than almost anyone in Washington — or Kabul — could have imagined. As of Sunday afternoon, Afghan President Ashraf Ghani had fled his nation, the Taliban were on the verge of once again running the country, and President Biden authorized sending in thousands of additional troops to try and safely extract U.S. diplomatic personnel and others out of Kabul.

John says the buck stops with the President

President Biden defended the decision to move forward with the withdrawal of U.S. troops from Afghanistan, saying Monday he stands “squarely behind” it. Mr. Biden’s remarks came after a chaotic day at the Kabul airport as evacuations were halted for several hours after at least two people died.

“How many more generations of America’s daughters and sons would you have me send to fight Afghanistan’s civil war when Afghan troops will not?” said Mr. Biden, in remarks from the East Room of the White House. “How many more lives, American lives, is it worth, how many endless rows of headstones at Arlington National Cemetery?”