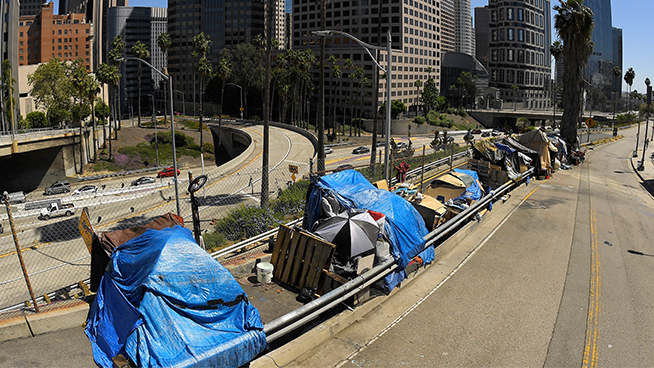 FILE – This May 21, 2020 file photo shows a homeless encampment on Beaudry Avenue as traffic moves along Interstate 110 in downtown Los Angeles. A $1.2 billion program aimed at building housing for homeless people in Los Angeles has been plagued by delays and soaring costs that have seen the average price of constructing a single unit jump to nearly $559,000, according to a city audit, on Wednesday, Sept. 9. (AP Photo/Mark J. Terrill,File)

Caltrans will begin clearing more homeless encampments and Nikki Medoro fields calls from listeners about the best ways to help the unhoused.

“Caltrans is now allowing its districts to address moderate and lower-priority encampments upon availability of shelter or housing and assistance from local partners to help move people experiencing homelessness into stable living situations,” Caltrans spokesman Matt Rocco wrote in an email.

Nikki Medoro explains the decision is due to an overwhelming issue stating:

“We have an epidemic of people literally laying at our feet telling us, through their actions, that they are unable to take care of themselves. They are also not in their right minds to realize that pitching a tent, on an express way, is not a proper place for housing…it might sound harsh but its true.”

Will Caltrans efforts be effective? Are there better ways to help the homeless?

Listen to Nikki Medoro talk to KGO listeners about potential solutions for individuals in homeless encampments.