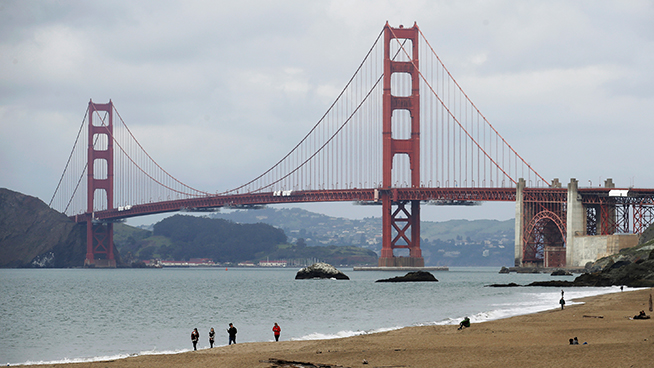 FILE – In this March 28, 2020, file photo, a small group of people walk in front of the Golden Gate Bridge at Baker Beach in San Francisco. The San Francisco Chronicle reported Saturday, May 15, 2021, that the iconic span started emanating a loud hum following a retrofit last year of the sidewalk safety railing on its western side. Crews replaced some 12,000 wide slats with narrower ones, to give the bridge a slimmer profile and make it safer in high winds. (AP Photo/Jeff Chiu, File)

The rising sea level could pose an enormous threat to San Francisco Bay’s shoreline in the coming decades, according to experts studying the issue.

So perhaps it’s no surprise that there’s now talk of looking into an equally enormous response. Why not build a barrier to keep rising tides outside the Golden Gate?

Researchers in the past have dismissed this seemingly straightforward concept on environmental grounds. Engineers are skeptical, too. But the enormity of the challenge has some Bay Area leaders saying it should at least be studied.

How do you think we can protect the Golden Gate Bridge? John Rothmann discusses potential options with listeners below.