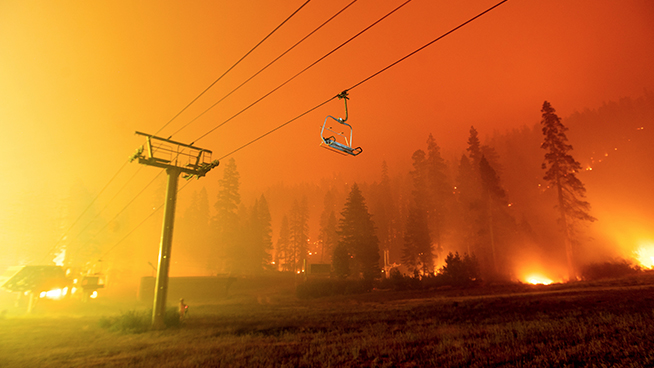 Seen in a long camera exposure, the Caldor Fire burns at the Sierra-at-Tahoe ski resort on Sunday, Aug. 29, 2021, in Eldorado National Forest, Calif. The main buildings at the ski slope’s base survived as the main fire front passed. (AP Photo/Noah Berger).

Lake Tahoe, typically crowded with thousands of tourists this time of year, is instead vacant after the rapid growth of the Caldor Fire forced a mass evacuation on Monday, triggering hours of gridlocked traffic.

Firefighters gathered Tuesday to defend homes in the Christmas Valley area, about 10 miles from South Lake Tahoe City. Now active for 17 days, the Caldor Fire has burned 191,607 acres and is 16% contained.

“There is fire activity happening in California that we have never seen before. The critical thing for the public to know is [to] evacuate early,” said Chief Thom Porter, director of the California Department of Forestry and Fire Protection, or Cal Fire. “For the rest of you in California: Every acre can and will burn someday in this state.”

Only twice in California history have blazes burned from one side of the Sierra Nevada to the other, both this month, with the Caldor and Dixie fires, Porter said.

Click here for the full list of evacuation orders. For individuals evacuating, Highway 88 is closed between Peddlers Ridge and the Highway 88/89 interchange.

Listen as Cal Fire’s Captain Steven Horner updates The Morning Show with Nikki Medoro on evacuation efforts in South Lake Tahoe as firefighters continue their battle against the Caldor Fire.

Evacuation orders have been issued for all 22,000 residents of South Lake Tahoe. The two-week-old Caldor Fire, which started on August 14th, dropped from 19% to 14% containment on Sunday after a shift in weather; running 2.5 miles and roaring closer to South Lake Tahoe. The fire has gained more than 25,000 acres according to Cal Fire’s Operations Section Chief Tim Ernest.

Listen as Pat Thurston gives an update below: