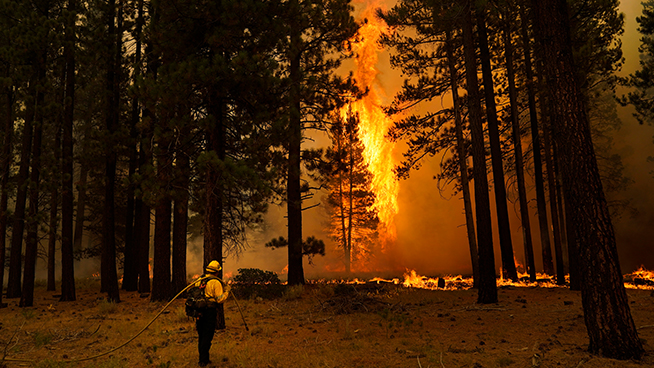 A tree flares up as firefighters continue to battle the Caldor Fire near South Lake Tahoe, Calif., Tuesday, Aug. 31, 2021. A huge firefighting force gathered Tuesday to defend Lake Tahoe from the raging wildfire that forced the evacuation of California communities on the south end of the alpine resort and put others across the state line in Nevada on notice to be ready to flee. (AP Photo/Jae C. Hong)

Firefighters gathered Tuesday to defend Lake Tahoe from a raging wildfire that forced thousands of South Lake Tahoe residents to evacuate and put others across the state line in Nevada on evacuation warning.

Here’s the latest information on the Caldor Fire:

Active for 18 days, nearly 4,000 firefighters are helping battle the fire that’s burned 204,390 acres thus far. Cal Fire reports Wednesday that they lucked out overnight, with the winds not being as bad as expected. Crews also took advantage of cooler temperatures. Click here for the full list of evacuation orders.

The Morning Show with Nikki Medoro speaks with Cal Fire’s Steven Horner to get the latest in the battle against the Caldor Fire closing in on Lake Tahoe. Nikki also speaks with John Handlery of San Francisco’s Handlery Hotel about the fabulous deal he is offering evacuees of the Caldor Fire.

Alex Stone has the latest on the fire’s progress and the efforts to stop it.