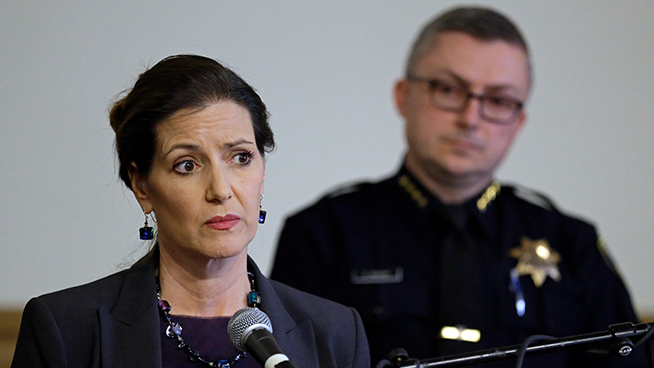 FILE – In this May 13, 2016 file photo, Oakland Mayor Libby Schaaf, left, speaks beside then-Oakland Chief of Police Sean Whent in Oakland, Calif. A federal judge has summoned lawyers for Oakland to court Monday July 10, 2017, to explain the city’s mishandling of a police sexual misconduct investigation that led to the chief’s resignation and implicated two dozen officers throughout the San Francisco Bay Area. The scandal surrounding accusations that officers exploited an underage prostitute also scuttled the city’s attempt to get out from under 15 years of federal court supervision. (AP Photo/Ben Margot, File)

Oakland Mayor Libby Schaaf joins The Morning Show with Nikki Medoro to talk about a variety of issues affecting the East Bay including the possible end of federal oversight of the Oakland Police Department.

The Oakland Police Department was first put under federal oversight in 2003 after a series of abuses and civil rights violations, including by a group of officers known as the Riders. Almost two decades later, the potential end in the oversight comes after years of reform efforts, led by civil rights attorneys John Burris and Jim Chanin, who filed a lawsuit 21 years ago that prompted the federal intervention.

“The need to reform police, deliver a more holistic sense of safety and justice is so important. This is work that will continue forever, it must continue forever, regardless of whether a federal court is overseeing it or not. I do want to recognize the progress that attorney’s like John Burris pointed out, that the Oakland Police Department….is now being noticed as one of the best departments in the country… the OPD was ranked first in the nation for the lowest officer shooting rate [and] the best improvement in reducing racial deparicities and arrests. It is really important to recognize that progress but believe me Nikki, federal court or no federal court – oversight, reform, that is work that must always continue.

“For our officers and for our community, I think everyone should feel a sense of hope,” said Oakland Police Chief LeRonne Armstrong. “We’ve just been working as hard as we can to make sure that we’re compliant with the mandates. It’s good to see that we’re being recognized for the work that’s being done, but we have not crossed the finish line.”

“We’re feeling good about the progress that has been made, particularly in the area of racial profiling, stop data, handcuffing, the use of deadly force,” explained Burris. “We have not had many police shootings and more importantly there’s an accountability for, and committees reviewing this that seem to be functioning properly.”

Listen to Mayor Schaaf tell Nikki Medoro about the oversight ending, California Recall, and the latest on the A’s new stadium below.