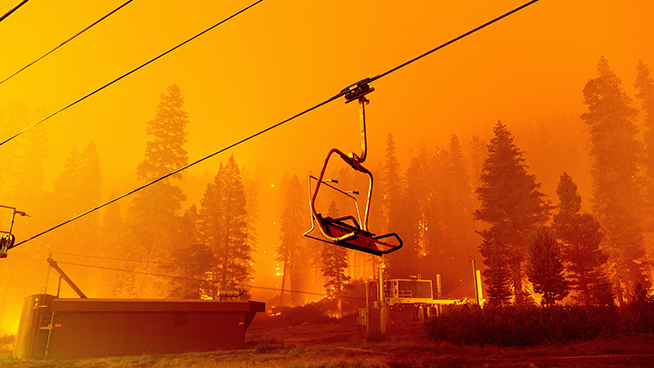 FILE – In this Sunday, Aug. 29, 2021 file photo, the Caldor Fire burns as a chair lift sits at the Sierra-at-Tahoe ski resort in Eldorado National Forest, Calif. The main buildings at the ski slope’s base survived as the main fire front passed. Last week, managers overseeing the fight against the massive wildfire scorching California’s Lake Tahoe region thought they could have it contained by the start of this week. Instead, on Monday, Aug. 30, 2021, the Caldor Fire crested the Sierra Nevada, forcing the unprecedented evacuation of all 22,000 residents of South Lake Tahoe. (AP Photo/Noah Berger, File)

(CNN) – The winds fueling the massive Caldor Fire in California may subside in the coming days, bringing the possibility of lighter fire activity after the blaze drove thousands out of their homes this week.

“The issues and conditions that weather was causing, especially for the last couple of days, are going to be mitigated by much lighter winds across the fire,” Incident Meteorologist Jim Dudley said in an update.

The glimmer of good news comes after firefighters made some progress in taming the Caldor Fire, which had ballooned to 210,259 acres as of Thursday morning, with containment reaching 25%, according to Cal Fire.

The fire has been burning for nearly three weeks and is threatening the tourist city of South Lake Tahoe as it marches toward Nevada’s border.

KGO political analyst Gary Dietrich joins the Morning Show with Nikki Medoro live from South Lake Tahoe as he works to connect evacuees with his non-profit group, Safely Out. Also, will the wildfires have an effect on the Gavin Newsom Recall vote coming up in a couple of weeks?

CalFire Captain Keith Wade tells the Morning Show with Nikki Medoro the weather pattern looks favorable for firefighters battling the Caldor Fire in the coming days. Also, are you actually prepared for the next natural disaster? And, Joe Rogan takes the horse drug to treat his Covid infection.