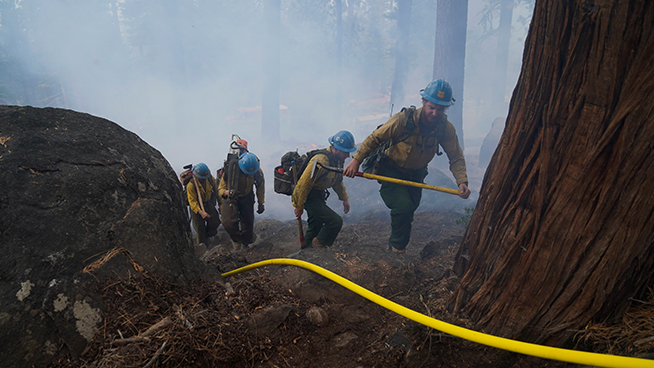 Members of a hotshot crew hike up the mountain while battling the Caldor Fire in South Lake Tahoe, Calif., Friday, Sept. 3, 2021. Fire crews took advantage of decreasing winds to battle a California wildfire near popular Lake Tahoe and were even able to allow some people back to their homes but dry weather and a weekend warming trend meant the battle was far from over. (AP Photo/Jae C. Hong)

The mandatory evacuation order for 22,000 South Lake Tahoe’s residents is officially lifted, but the threat remains as Caldor Fire is 49% contained.

Firefighters are confronting aggressive winds and flames in some southeast sections of the Caldor Fire, which could still reach Meyers, a community more than a mile high known as the gateway to Lake Tahoe, and other areas including the Kirkwood ski resort, reported KRON4.

More than 5,000 personnel continue to protect the surrounding resort communities and the homes of employees who staff casinos, restaurants, and ski resorts.

“We’re also looking long term — what’s going to happen, four, five or six days down the road. We want to make sure we’re planning and having stuff ready and completed” before more people can return home, Cal Fire official John Davis said. “And if it comes sooner, we are already in the planning process for the whole area that’s still under evacuation order.”