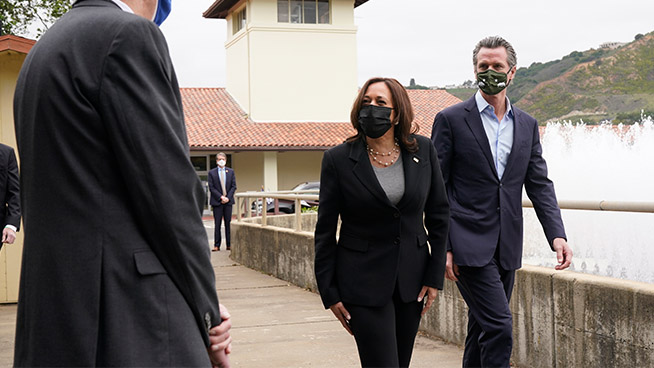 (CNN) – Vice President Kamala Harris will campaign with California Gov. Gavin Newsom on Wednesday in the Bay Area, following through on her commitment to help the embattled Democratic governor defeat the Republican-led effort to oust him in the September 14 special election.

The former California senator will be the most high-profile surrogate to appear with Newsom, who was targeted by Republicans for recall early last year — an effort that gained steam because of anger among many Californians about his pandemic restrictions.

Newsom campaigned in Los Angeles on Saturday with Massachusetts Sen. Elizabeth Warren as they attempted to activate Democratic voters, who had been much less enthusiastic about returning their ballots than Republicans, according to polling throughout the summer.

Advisers hope that the vice president will help reinforce to progressive voters the stakes of Newsom’s potential ouster and replacement by a Republican, especially how California could affect the fragility of the Democratic majority in the 50-50 US Senate.

As governor, Newsom appointed Harris’ Democratic replacement in the Senate, and he could potentially be tasked with that role again if he had to name a replacement for Sen. Dianne Feinstein, who is 88, if she were to decide to retire early — though she has no plans to do so.

Newsom’s allies believe Harris can emphasize the California governor’s power to advance women’s rights — especially in the wake of Texas’ strict six-week abortion ban going into effect, as well as the agenda of progressive voters and voters of color.

Listen below as Pat Thurston reports how many votes are already in as the last week of campaigning ramps up.

Around 26% of ballots have already been returned ahead of the Sept. 14 recall election

Franklin shares two reasons why the recall is horrible and one good thing that came out of it.