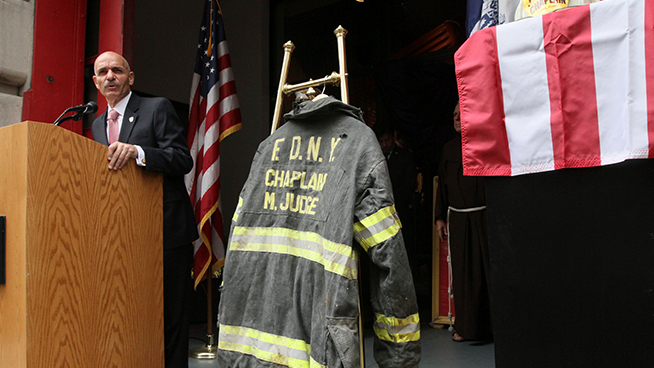 FILE – In this Sunday Sept. 11, 2011 file photo, the bunker coat and helmet worn by FDNY Chaplain Mychal Judge are displayed as City of New York Fire Commissioner Salvatore J. Cassano speaks at the New York City Fire Museum in New York during a memorial ceremony for the 343 members of the FDNY who lost their lives in the World Trade Center attacks. The bunker coat and helmet worn by Father Judge on Sept. 11, 2001, were dedicated to the museum during the service. (AP Photo/Tina Fineberg, File)

This Saturday brings the 20th anniversary of the terrorist attacks on September 11, 2001.

On a day that changed America forever, the first responders quickly became heroes as they worked to rescue as many people as possible. Retired Fire Department of New York Battalion Chief Joseph Pfeifer, also author of “Ordinary Heroes: A Memoir of 9/11”, joins The Morning Show with Nikki Medoro to discuss what we’ve learned two decades after September 11, 2001 and we can best honor those who gave their lives to fight terrorism against humanity.

Listen to the full conversation between Chief Joseph Pfeifer and Nikki Medorobelow.

Has the country changed for the good or the bad after 9-11?

Pat Thurston hears from listeners below.