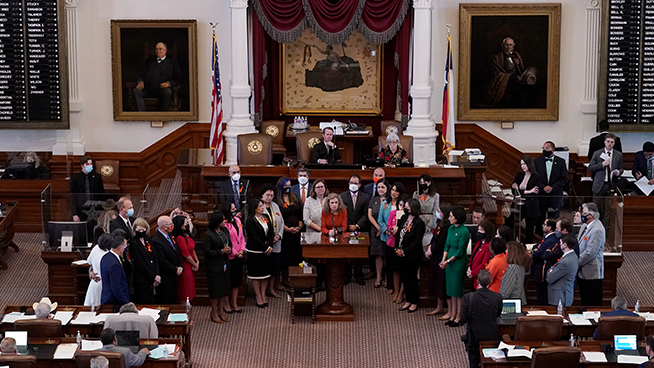 FILE – In this May 5, 2021, file photo, Texas state Rep. Donna Howard, D-Austin, center at lectern, stands with fellow lawmakers in the House Chamber in Austin, Texas, as she opposes a bill introduced that would ban abortions as early as six weeks and allow private citizens to enforce it through civil lawsuits, under a measure given preliminary approval by the Republican-dominated House. A Texas law banning most abortions in the state took effect at midnight on Sept. 1 but the Supreme Court has yet to act on an emergency appeal to put the law on hold. If allowed to remain in force, the law would be the most dramatic restriction on abortion rights in the United States since the high court’s landmark Roe v. Wade decision legalized abortion across the country in 1973. (AP Photo/Eric Gay, File)

(CNN) – In its lawsuit challenging Texas’s six-week abortion ban, the Justice Department is throwing a Hail Mary pass to get over the procedural stumbling blocks that have thwarted other attempts to block the ban in court.

The lawsuit, filed Thursday in a federal court in Austin, relies on a novel strategy in seeking to halt enforcement of the ban, which was designed specifically with the goal of evading review of federal courts.

The arguments that the Justice Department is presenting on the merits — that the law violates Supreme Court constitutional precedent on abortion rights — are on solid ground. But the question is whether its lawsuit can get around the same procedural issues that doomed the earlier federal lawsuit brought by abortion clinics.

John Rothmann takes time on his show to ask callers if they agree with Attorney General Merrick Garland’s decision to sue the state of Texas over their new abortion law that was recently passed by Governor Greg Abbott. Listen to the conversation below.