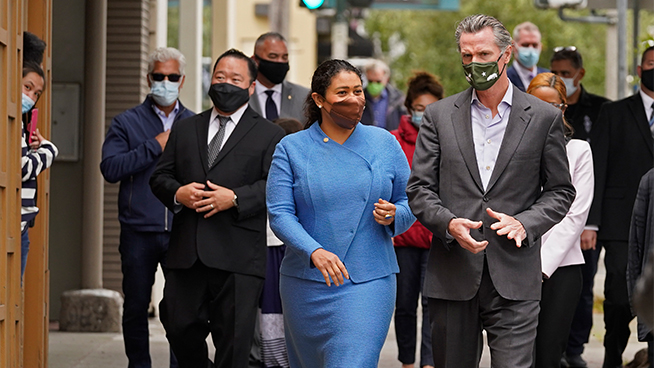 California Gov. Gavin Newsom walks with San Francisco Mayor London Breed on Geary Street to a news conference outside Tommy’s Mexican Restaurant in San Francisco, on Thursday, June 3, 2021. The governor offered his support at the news conference for the extension and expansion of outdoor dining and take-out cocktails. (AP Photo/Eric Risberg)

The ballot features two questions. The first question asks voters whether or not to recall Newsom. The second gives voters a choice between more than 40 candidates about who should replace him, if he is recalled.

While many have already voted early by mail or in person — ballots arrived in the mailboxes of every registered California voter last month — others will cast their ballots Tuesday.

California, today is Election Day. We’re counting on you to vote NO on the recall to keep @GavinNewsom in office and California moving forward.

Polls are open until 8pm. Make your voice heard.

Oakland Mayor Libby Schaaf tells Californians to vote no on the recall election.

Every vote counts! Did you get that ballot into a drop box? Did you ask your friends to vote NO today? Final chance to vote NO on the Republican recall! https://t.co/OKTarH8gZs

San Francisco Supervisor Matt Haney reminds voters, “If you mail your ballot today, it WILL be counted if it is postmarked today. ”

Today is the last day to vote NO on the Republican backed recall of @GavinNewsom.

Polling places are open all over the city where you can vote or drop off your ballot: https://t.co/Gli3Fkis2K

If you mail your ballot today, it WILL be counted if it is postmarked today.