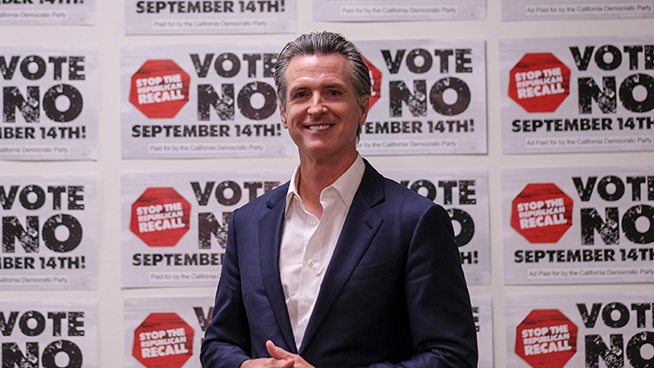 California Democratic Governor Gavin Newsom defeated a Republican-backed effort to remove him from office, making him the second governor in U.S. history to defeat a recall election.

A majority of California voters rejected Tuesday’s recall effort and voted “no” on whether they want to remove Newsom from office.

Newsom brought President Joe Biden and Vice President Kamala Harris to California in the final stretch of campaigning against the threats of “Trumpism”. The special guests may have influenced voters as Newsom will remain in office.

Listen to Politico’s Carla Marinucci join The Mark Thompson Show to break down the California Recall.

ABC News Correspondent, Alex Stone joins The Morning Show with Nikki Medoro to review the overnight numbers on the recall election. Plus, ABC Senior investigative reporter, Aaron Katersy discusses the possibility of children under 12 getting the covid vaccine this fall with Nikki Medoro.

Governor Newsom is here to stay.

As the CA Recall Election polls closed at 8 pm Tuesday night, John Rothmann and Kim McCallister report live on the election results, along with some of your predictions. Governor Newsom closes out The John Rothmann Show with a live speech on his victory. Listen below.