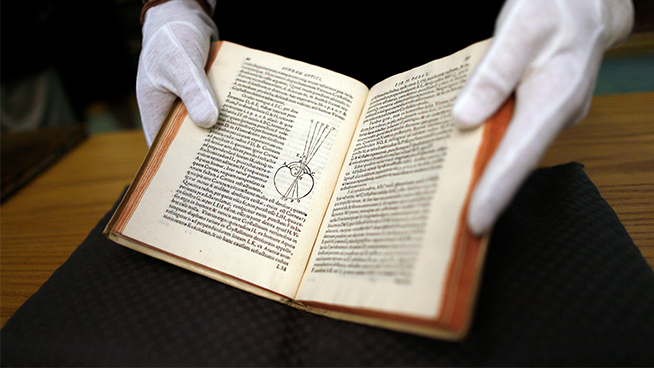 Greger Bergvall, National Library of Sweden Librarian, shows Christoph Scheiner’s “Oculus, hoc est, fundamentum opticum” during a repatriation ceremony to return to the National Library of Sweden two antique books printed in the 1600s that were stolen in the 1990s, Wednesday, June 17, 2015, in New York. The two books, Christoph Scheiner’s “Oculus, hoc est, fundamentum opticum” and Nicola Sabbattini’s Pratica di fabricar scene e machine ne’ teatri” are part of a group of at least 56 rare of on-of-a-kind books that were stolen from the Nation Library of Sweden’s collection by Anders Burius, a former employee of the Library. (AP Photo/Mary Altaffer)

Welcome to KGO in 8:10, a podcast for exclusive, not-on-the radio comments, thoughts, opinions, and stories. We know you’re busy and have countless options when it comes to choosing podcasts, so each podcast in this series will last 8-minutes and 10-seconds.

As a fan of KGO, you’ll get to hear from our five talented and veteran hosts discussing subjects that for a variety of reasons, don’t make it on the air. Some may be too personal while some may be too controversial. You’ll have to give us 8-minutes and 10-seconds to find out.

On John Rothmann‘s first episode of KGO in 8:10, he shares ten meaningful items in his personal library that are all autographed by indidivudals who have helped make history.

Listen to John describe the treasures of his life from his astounding collection below.