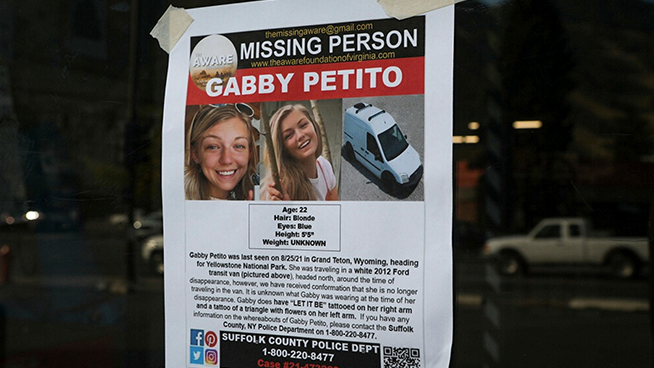 This Thursday, Sept. 16, 2021, photo, shows a Suffolk County Police Department missing person poster for Gabby Petito posted in Jakson, Wyo. Petito, 22, vanished while on a cross-country trip in a converted camper van with her boyfriend. Authorities say a body discovered Sunday, Sept. 19 in Wyoming, is believed to be Petito. (AP Photo/Amber Baesler)

The remains of Petito, the 22-year-old who disappeared while on a road trip with her fiancé, were recovered in Wyoming’s Bridger-Teton National Forest on Sunday. A coroner made an initial determination on Tuesday that she died by homicide.

Now, the FBI is asking for the public’s help in finding Laundrie, who returned home to Florida without Petito three weeks ago.

The search for Laundrie resumed at 8 am Wednesday at a swampy Florida nature reserve as new information emerged about his previous movements and about the couple’s volatile relationship. The couple had posted online regularly about their travels with the hashtag #VanLife, but those posts abruptly stopped in late August.

KGO hosts Nikki Medoro, Chip Franklin, Pat Thurston, and Chris Merrill discuss the tragic case. As details emerge, light is now being thrown on a larger issue: more than 70% of missing females in the United States are women of color, yet they rarely receive the coverage afforded to their caucasian counterparts. Begging the question, why is America obsessed with missing white women?

With the Wyoming coroner officially declaring Gabby Petito’s cause of death a homicide, the Morning Show with Nikki Medoro gets the latest on the search for her killer from ABC News Correspondent Jim Ryan.

As tragic details surrounding the now confirmed remains of the van-life girl continue to emerge, light is being thrown on a larger issue: women and girls of color make up more than 70% of missing females in the US. They rarely receive the coverage afforded to their caucasian counterparts. Why?

ABC’s Alex Stone joins The Chip Franklin Show to discuss the frenzy of media attention, pop-up podcasts, and amateur sleuthing that has accompanied the unfolding case about the disappearance of Gabby Petito, whose body was discovered over the weekend at a Wyoming national park.

In her social media posts, 22-year-old Gabby Petito referred to a cross-country road trip with her fiancé, Brian Laundrie, as “van life.”

What was supposed to be a dream trip for the young couple turned into a nightmare for Petito’s parents after police say Laundrie returned to North Port in her white Ford van alone. Now, a body matching Petito’s description has been found out west and Laundrie himself is missing.