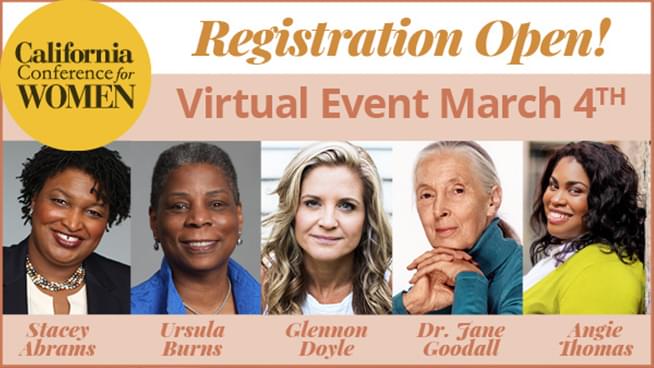 Stacey Abrams will speak about moving forward after a setback at the inaugural California Conference for Women, a virtual event to be held on March 4th. Abrams, the first Black woman in U.S. history to earn a major party nomination for governor, will share her own journey of moving from setback to success. Abrams is a lawyer, entrepreneur, and award-winning author of numerous books, including eight romantic suspense novels. Her TED Talk, “3 Questions to Ask Yourself about Everything You Do,” has attracted more than 5 million views. She was named to the Forbes list of World’s Most Powerful Women in 2020.

The Conference, which is being held during Women’s History Month, will focus on helping women move forward from a pandemic and economic crisis that forced more than 2.2 million women to leave the workforce in 2020. “We thank all the companies that are making an investment in this conference during a time of unprecedented pressures on working women,” said Laurie Dalton White, the founding director of the Conferences for Women. “Their support shows that they recognize the importance of doing what is needed to retain talented women in the workplace.”

The nonprofit, nonpartisan California Conference for Women is part of the nation’s largest network of women’s conferences, which includes events in Massachusetts, Pennsylvania, and Texas. Its 2020 events attracted more than 40,000 attendees. The March event will offer expert-led sessions on resiliency; dismantling inequalities at work; parenting; and breaking bad habits. It will also offer facilitated networking sessions, a virtual career fair, and ways to support women-owned businesses. In partnership with Target, there will also be a celebration of California women who are frontline workers as part of the Storytellers Contest. The California Conference for Women is generously underwritten by presenting sponsor Google; champions for women sponsors Gilead Sciences, Inc., Juniper Networks and Silicon Valley Bank; official lifestyle sponsor Target; and official networking sponsor Cisco, among others. For a full list of sponsors, click here.

Add to my calendar