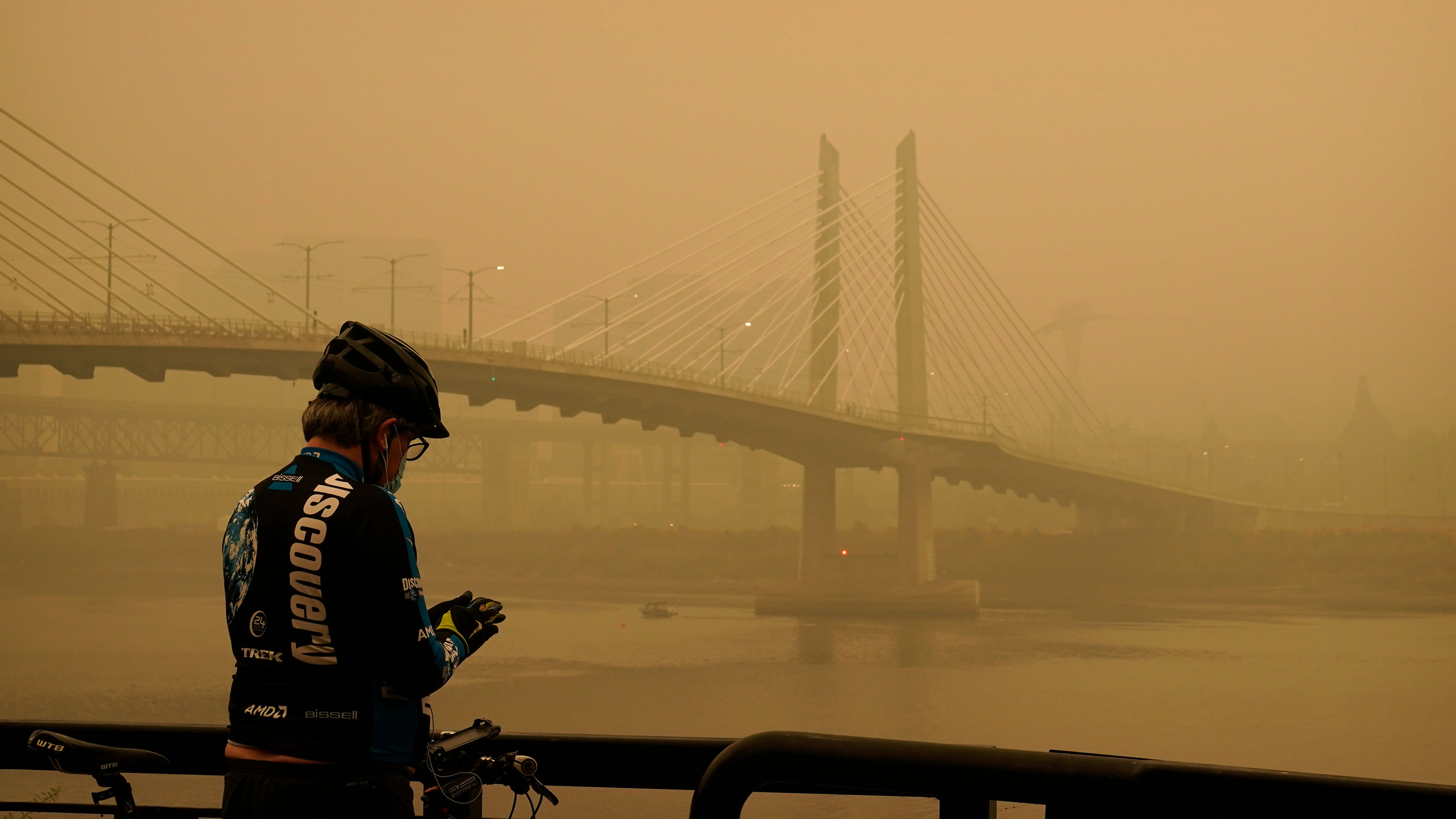 In the foothills below the Bobcat Fire, just northeast of Los Angeles, the smoke just hangs all day, every day.

“Thirty-plus years ago, I quit smoking,” Mike Day, of nearby Monrovia, told CNN on Saturday. “But I’ve started again in the last six days, just from (breathing) the air.”

Day is among thousands of people on the West Coast who feel they are unable to go outside without the poor air quality taking a toll on their health.

The almost 90 large wildfires raging in the West have killed at least 36 people, destroyed hundreds of buildings and even entire towns. The fires have also burned more than 4.6 million acres in the West, creating massive plumes visible even on the International Space Station.

The smoke, many say, has become unbearable.

People in states like California, Oregon and Washington said they have had physical reactions — headaches, drowsiness and dry, burning eyes — after air quality index rates in their areas soared.

Air quality levels from Canada to Southern California are unhealthy or even hazardous, according to the US government’s AirNow Smoke Map. And three cities — Portland, Oregon, Seattle and San Francisco — now have the worst air quality of any in the world, according to the monitoring group Air Quality Index.

Oregon’s congressional delegation urged Health and Human Services Secretary Alex Azar to declare the wildfires there a public health emergency, saying 10% of all hospital admissions are asthma-related, according to a statement from Sen. Ron Wyden’s office.

“Over the last several days, air quality across Oregon has ranked among the worst in the world and even maxed out the scale used by the Environmental Protection Agency to measure hazardous air quality,” the statement said.

Terrence Petty, a Portland resident, said the city’s “smoke-clogged air has compounded the anxiety” people are feeling from the daily protests and the pandemic.

“We didn’t see the sun for several days. People are staying inside. This is especially difficult for Portlanders, who are fond of going for walks in city parks, cycling, and other outdoor activities.”

Petty usually rides his bicycle 30 miles every day. But he said he hasn’t been able to ride it since last Thursday.

“I miss the outdoors,” he said. “I’m not the only one who’s starting to go stir crazy.”

‘A cloud of smoke’ over Washington

Washington Gov. Jay Inslee said that “virtually the entire state is covered by a cloud of smoke.”

In Spokane, Washington, where there were several large fires to the south and northwest, the fine particle pollution Sunday was “more than 13 times the national, health-based standard of 35 micrograms/cubic meter of air,” according to a Spokane Regional Clean Air Agency tweet.

Richard Goodrich, an associate professor of history at the Gonzaga University, went out to take photographs of the smoke Sunday night, donning two cloth face masks.

“It is hard to breathe, and the smoke causes sore throats and a nagging headache,” Goodrich told CNN.

Over in Seattle, Oakland A’s pitcher Jesús Luzardo said he was “gasping for air” during his start on Monday’s game against the Mariners.

In California alone, wildfires have destroyed more than 3.2 million acres of land, health officials said on Tuesday. That is an area almost the size of Connecticut.

In the San Francisco Bay Area, the longest stretch of unhealthy air quality alerts record is broken daily. The alert has been extended through Wednesday, which would be 30 days of alerts in a row.

The previous record was 14 consecutive days, set during the 2018 Camp Fire that devastated the city of Paradise.

Katherine Simon, who has lived in San Francisco for almost 18 years, said she’s never seen anything like the conditions there last week, when people had their lights on in the middle of the day because the sky was so dark.

“I typically will take the dog out by now on a walk, but it’s almost to a point you don’t really even want to go outside,” she told CNN.

In Los Angeles, Joaquin Baldwin said the air quality has made him feel drowsy, and his eyes have started to burn.

“The air quality was pretty bad, even inside the house with everything closed,” Baldwin, an animation layout artist, told CNN. “It’s not healthy at all.”

A homemade air purifier — which he made using a fan and filters he bought from the hardware store, after seeing that air purifiers across the Coast were sold out — helped.

But he still is avoiding the outdoors as much as possible.

“We have a balcony here and we don’t allow for more than a minute or two just to look out for a second. It’s very strong when you go out. You’re just inhaling smoke the whole time.”

The alarmingly high level of smoke in the air has physicians concerned.

“Because the levels have been high enough, long enough, and research studies show the health effects of that, especially for vulnerable populations, from wildfire smoke exposure.”

Prunicki cited a Canadian study that showed within an hour of a community experiencing wildfire smoke, “you can see an increase in ambulance calls for respiratory and cardiac distress.”

“And then you layer on the Covid pandemic on top of it, and the fact that we’re going into influenza season.”

The Air Quality Index in many places along the West Coast has been soaring. An AQI of 301 or more is hazardous, and in some places, including Sisters, Oregon, on Tuesday, it’s above 400.

Even much lower levels are especially bad for people with heart of lung conditions, the elderly, children and teenagers, said Dr. John Balmes, a pulmonologist at University of California San Francisco.

Prunicky said she checks the AQI before leaving the house and advises others to do that, too. “We keep checking it and hope that at some point it’s tolerable to go out for a while,” she said.

Doctors are also worried the bad air could make people with Covid-19 sicker.

“There was worry before the actual fires started about the potential interaction between bad air quality due to wildfire smoke, and COVID-19,” Balmes said.

“Because there are a number of studies from China, from the Netherlands, from Italy, and at least one from the US that suggest that air pollution exposure can cause progression from asymptomatic SARS-CoV-2 infection to more symptomatic COVID-19, and even death.”